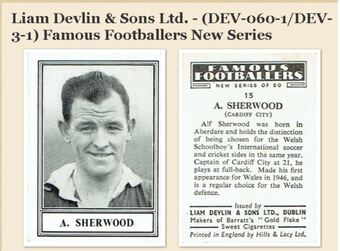 5               William Devlin born 18 Jun 1877 at Derry.  He worked as a post office clerk in Derry
before moving to Scotland.  In 1903 he was living at 6 Nelson Street and was granted a
public-house licence for 17 Bearhope Street in Greenock.  He married Margaret Veronica
McDermot, daughter of Patrick McDermot of Moville, Co Donegal on 18 Jun 1907 at St
Mary’s RC Church in Greenock, Scotland.  Liam was on the committee of the Donegal
Reunion Association and received a marble clock from them on his marriage.  In 1913 he
bought the Crown Hotel in Irvine.
​
He moved back to Ireland circa 1920 and purchased a public house at Parnell Street.  These
premises were used as a meeting place by Michael Collins and his associates during the
struggle for independence. In 1924 he sold the pub for 9K and purchased Westbury in
​                 Kilmacud where they lived with their 9 children for 8 years.  He was operating a sweet factory
at 45 O’Connell Street called Blue Badge (BB) Toffee and by 1925 he had opened a factory at
Gloucester Street.  By the late 1930’s manufacturing had moved to Cork Street where one of
their most popular products was the ‘Sweet Cigarette’.  Liam was involved in various business
over the next two decades.  They moved to 39 Upper Mount Street in 1931 before moving to
Monkstown.  Liam died 29 Sep 1964 aged 87 late of The Slopes, Sloperton Monkstown and
was buried at Deansgrange.  Margaret died 15 Jul 1972 aged 74 and was buried with her
husband.

1          Denis Devlin born 15 April 1908 in Greenock moved with his parents to Ireland circa
1920.  He was educated at Belvedere, graduated BA from UCD in 1930 and published a
book of poetry with lifelong friend Brian Coffey.  He travelled to Germany and France
returning in 1933 to UCD to take his masters.  He entered the civil service and in 1938
was appointed First Secretary, Italy.   He married Marie Caren Randon, daughter of
Louis Randon at St Stephens Church in Washington on 9 Jan 1947.  A career diplomat he
last appointment was as Ambassador to Italy.  He died 21 Aug 1959 at St Vincent’s
Hospital late of Sloperton, Monkstown and was buried at Deansgrange.  Two further
books of poetry were published posthumously.

4           Maigread (Moya) Devlin attended UCD.  She was an amateur actress and a member of
the University players.  She was offered a film contact by the director Walter Forde in
1935 when she was spotted in a show in the Peacock Theatre.  Moya married Walton
Lindsay son of the Rev AT Lindsay of Epworth Lodge, Rhyl at St Patrick Church, Monkstown
on 4 Jul 1942.