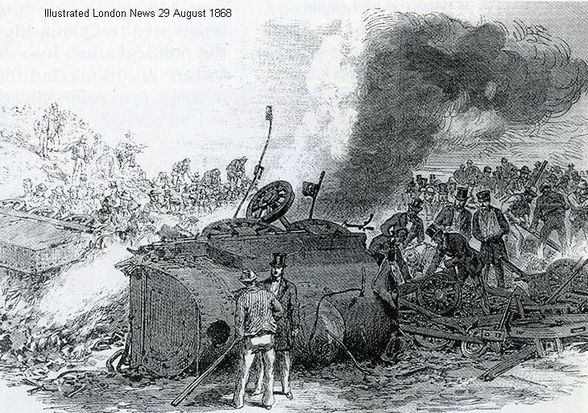 On 20 Aug 1868, at 7.30am, the Irish Mail train left the LNWR's London terminus Euston Station
for Holyhead.  Just beyond Abergele, Arthur Thompson, the engine driver saw some wagons in
front.  He thought the wagons were on the up line but almost instantly realised they were loose
and running towards him on the down line on which he was travelling.  He shut down steam and
the brake was applied.  Thompson prepared to jump clear and called to his fireman 'For God’s
sake Joe, jump..we can do no more'.  Thompson jumped, Joe the fireman, did not.

The runaway carriage trucks were carrying barrels of paraffin which exploded when they hit the
Holyhead train.  Few passengers realised that there were passenger coaches in front of the mail
coach as their vision was obscured by the flames and smoke.  Telegraph contact was lost as the
poles and wires were burned.  No human cries were heard, medics at the time of the inquest
thought that death of the passengers was instantaneous caused by suffocation.  This was of some
comfort to their relatives.

Thirty-three people were killed in the fire including Miss Roselie Franks, from Tudor House,
Dundrum, Whitmore Scovell and his sister Kathleen who had both lived at Ferney, Stillorgan, Anna,
Lady Chinnery (sister of John Vernon, of Mount Merrion) and Judge Walter Berwick who was on the
board of Stillorgan Convalescent Home.  The bodies were so badly burned that identification was
impossible.  Some were identified by relatives, who signed statements to say they had seen them
board the train.  Most were identified by their luggage or possessions.

All the remains were buried in a mass grave measuring 57' x 9' at Abergele Churchyard in Wales on
25 Aug 1868.