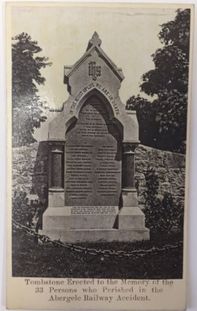 The Scovell family moved from Scotland to Dublin about 1834.  Henry had been Army Deputy Paymaster in the Iberian Peninsula from 1811 to 1814 and Army Deputy Paymaster in Canada in 1815.  He offered the tobacco bonding warehouse he leased called stack A, now known as the chq building on Custom House Quay, as the venue for the welcome home party for Irish soldiers who fought in the Crimean War.  It was reported at the time as being the biggest building in Dublin.  William Dargan offered his services and the materials for free to prepare the building for the banquet.  This Crimean Banquet took place there on the 22nd October and 1856 and it is thought that almost 6000 people sat down to dinner.

Henry was a keen yachtsman, he was a founder member of the Royal St George Yacht Club and his yacht was called The Atlanta.
Two of Henry & Anna Maria's sons were in the army and died, one as a cadet in Sandhurst and another from yellow fever while on duty in Brazil.  They were to lose two more of their children in the 1868 Abergele rail crash when runaway carriage trucks carrying barrels of paraffin collided with the Holyhead Irish mail train and exploded.  Their memorial is in St Michael's Church in Wales.  Henry and Anna Maria are buried in their family vault at Stillorgan along with their two boys William and Fitzhenry.
​
Henry's brother was General Sir George Scovell, know as 'The Man Who Broke Napoleon's Codes'.  Sir George died  on 19 Jan 1861 and Henry died 3 days later on the 22 Jan 1961 at Monkstown.  He was the oldest member of the St George Yacht when he died.   The funeral service was huge and led by Rev Thomas S Grey and he was buried at Stillorgan graveyard.

7         Kathleen Scovell born circa 1875  married Sir Cuthbert Slade at Kill Church on
2 Dec 1896 and moved to Maunsell, near Bridgewater in Somerset.  Cuthbert
was described as a brilliant horseman and died aged 44 in February 1908.
Kathleen died 14 Jan 1930 at Taunton in Somerset.

12        Kathleen Scovell, youngest daughter born circa 1841 of Wycroft, Bray, Co Wicklow died in the
Welsh Railway Disaster at Abergele on 20.08.1868 unmarried aged 27 with her brother
Whitmore.