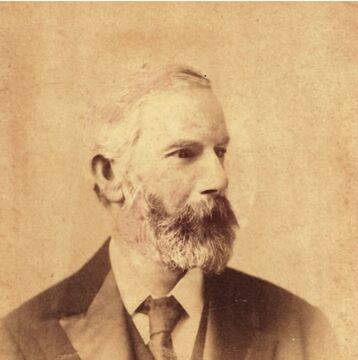 Thomas Franks of Ballmagooly, Co Cork married Catherine Day.  Catherine was the daughter
of the Rev John Day and sister to Judge Day.  Thomas died 7 May 1787 and was buried in the
Day family grave at St Anne's in Dawson Street.  Catherine died in March 1830 at
Mansfieldstown the home of her son in law Thomas Cuthbert.

3           Robert Fergusson Franks born circa 1807 at York Street baptised on 24 Apr 1807
at St Peter’s.  He was a practising Barrister-at-law.  He lived at Jerpoint, Co Kilkenny,
and at Upper Mount Street.  He married Henrietta Sarah Bushe on 24 Feb 1834 at
St Patricks.  Sarah, daughter of the Right Hon Charles Kendall Bushe.  He was
involved with The Society for the Promotion of the Education of the Poor in Ireland
(Kildare Place Society).  He also lived at Large Tudor House in Dundrum built  from
1865 to 1876.  They had at least twelve children.  He was elected a life member of
the RDS in 1863.  He died 12 Jan 1888 at 42 Fitzwilliam Place and left 18K in
personal estate.

2         James Gordon Franks eldest son born circa 1876 was a solicitor and
civil servant.  He married Margaret Fitzgibbon at Christ Church
Cathedral on 30 April 1904. He died on 2 Nov 1941.  Margaret was the
fourth daughter of the Rt Hon Gerald FitzGibbon, LL D.  They lived at
Roseneath, Malahide.  James died 2 Nov 1941 at Roseneath, Malahide.

7            Katherine Franks married The Rev Denis Mahony of Dromore Castle Co Kerry on
22 Apr 1845 at St Peters.  Denis was the son of John Mahony, barrister and they
moved to Middlesex.

1          Philip Crampton Smyly born circa 1838 was Surgeon-in-Ordinary to Queen
Victoria in Ireland.  He was consulting surgeon to the Hospital for
Diseases of the Throat and Ear, the Children's Hospital, Harcourt Street,
and the Rotunda Hospital Dublin. He married Selina (Nina) Plunkett
1 Feb 1864 at St Peters.  Philip was the son of the Hon John Plunket,
barrister of Sherrington, Bray.  Philip died on 8 Apr 1904 aged 65 and Nina
died 5 Dec 1921, both are buried at Mount Jerome.

2           John Franks second son born circa 1769.  He was a barrister and married Christiana Franks,
daughter of Thomas Franks and Margery Harte.  Christiana died 16 June 1811.  He was
appointed judge of the Supreme Court at Calcutta and knighted in 1822 before his departure
for India.  He held this office until the effect of the climate on his health brought about his
resignation in 1834.  On his return from India he resided at Roebuck.

He married, secondly, Jane Marshall, daughter of John Marshall.  Jane died in March 1848
at St Brigid's Clonskeagh.  John thirdly married Sarah Wollaston O'Regan, daughter of
William O'Regan.  He died on 11 Jan 1852 at St Brigids, Roebuck.  He was an intimate friend
of John Philpot Curran who was one of his executors.  Sarah continued to live at St Brigids
until 1857 and died 22 Feb 1874 at Waterloo Road.