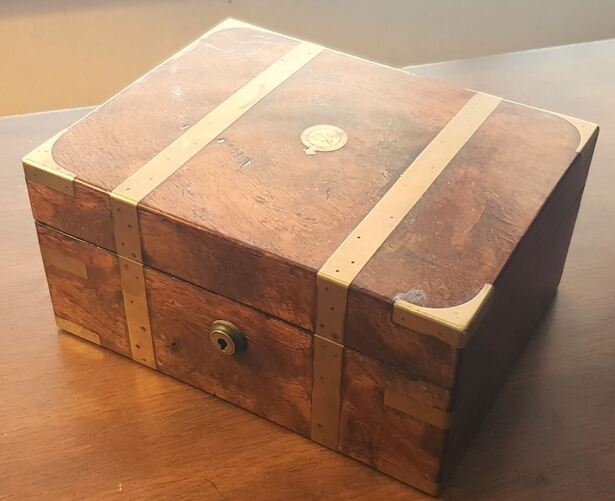 2            Thomas Orme born circa 1787 of Curramore, Co Mayo married Elizabeth Jackson on 23 May 1814
at Crossmolina.  Thomas was a Major in the North Mayo Militia and died from Typhus Fever in
June 1826.  The estates of Abbey Town were heavily mortgaged and were sold through the
Encumbered Court.  The purchaser being Godfrey Featherston, the family solicitor,who without
Elizabeth’s knowledge was the person who had loaned the money.  A settlement was made by
Featherston in 1860.  Elizabeth died 10 Jun 1862 at Hardymount, Co Carlow.

1            W Henry Orme born circa 1815 attended Elizabeth College and St John’s College, Oxford.
He further mortgaged the estate to purchase a commission in1845 and served with the
Bengal Regiment until 1853.  He was aide de camp to Sir J Jackson at the Cape of Good
Hope and then ADC to Major General Selby Smith at Mauritius.  He married Mary Annie
Bailey on 28 Oct 1878 in London.  Mary was the only daughter of George Bailey and the
widow of R T Maxwell of Saltern Towers and Croft Hall in Yorkshire.  He attained the rank
of Lieut Colonel and died 26 Apr 1879 at Brockhurst, Guernsey.

2            George Orme born circa 1817 became the agent to the Abbey town estates after they
were sold.  A new house was built on the land for his mother to live in.  He married Willa
St George on 6 Aug 1863 at Killereran, Tuam, Galway.  Willa was the daughter of Rev
Richard Quintas St George, Rector of Crossmolina and his wife Maria Langrishe.  By 1901
the family were living at Glenban, Abbeyleix.  George died 13 Apr 1902 at Glenban,
Abbeyleix.  By 1922 Willa and her daughter Harrie moved to Roebuck Hill.  Willa died
26 Apr 1932 at Roebuck Hill and was buried at Deansgrange.

1            Edith Marian Orme born 14 Jul 1864 at Abbey Town, Tuam. She worked with the
Red Cross during WW1 at the local supply depot and with her sister Harrie was in
charge of egg collection in Abbeyleix.  She was involved with the Ex- Servicemen’s
Movement (later the British Legion).  She was sworn in as a magistrate in 1920.
She died 1926 at Glenban, Abbeyleix and was buried at St Michael's & All Angels,
Abbeyleix.  Her funeral was attended By Senator Major General Sir William Hickie
who laid a wreath as did J Nickie Nolan ex RN on behalf of the United Services.

3             Willa Henrietta (Harrie) born 8 Oct 1868 at Ballina, Co Mayo.  She worked with the
Red Cross during WW1 at the local supply depot and with her sister Edith was in
charge of egg collection in Abbeyleix.  She attended many fetes, functions and fund
raisers with her sister Louie Westby and was a supporter of the British Legion.  She
died 11 Oct 1960 at Roebuck Hill and was buried at Deansgrange with her mother.