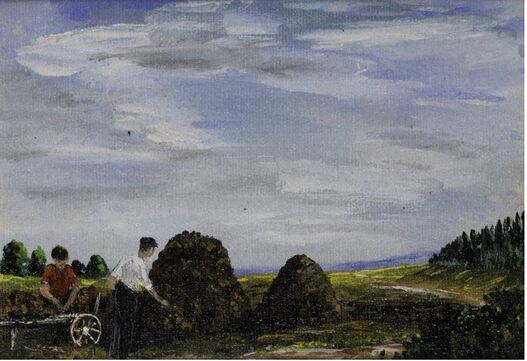 DAY OUT ON THE BOG and COTTAGE by Terry De Valera

Baptism Register for 3 Dec 1881 at St Agnes's Church, NY
Éamon de Valera* according to his baptism record of 3 Dec 1882 was born on 14 Oct 1882 to Vivian
De Valeros and Kate Coll (details later amended).  Sponsors John Hennessy and Mary Shine.  He was
reared by his grandmother, Elizabeth Coll, her son Patrick and her daughter Hannie, in Bruree, Co
Limerick, while his mother remained in New York.  Educated at the Christian Brothers school in
Charleville and Blackrock College.  He joined Blackrock School’s rugby team and played for Munster
in 1905.  He taught mathematics at Rockwell, Maynooth, UCD, the Dominican College, Eccles Street,
Loreto College and Carysfort College, where he was Professor of Mathematics .  He was a
commandant in the Irish forces during Easter Week rising in 1916.  He was the last of the
Commandants to surrender and was sentenced to death - commuted to penal servitude for life, and
released in 1917.  President of Sein Fein 1917 to 1925, President of the Irish Republic 1919-1921,
escaped from Lincoln jail in 1919.  President of Fianna Fáil and chancellor the NUI from 1921.

3                   Éamon De Valera born 11 Oct 1913 graduated UCD.  He qualified as a doctor in 1947 and was
admitted to the Royal College of Physicians of Ireland.  He married  Sarah Doherty on 7 Apr 1942.
He worked at St Luke's Hospital, the National Maternity Hospital, James Connolly Memorial
Hospital and the Mater Hospital.  He became Professor of Obstetrics and Gynaecology at UCD in
1960.  Eamonn died on 9 Dec 1980 and was buried at Glasnevin.

7                   Toirdhealbhach De Valera (Terry) born 1922 married Phyllis Blake.  Phyllis was the daughter of
Percival Blake MBE and Sarah Gordon.  Terry was a solicitor, later Registrar Faculty for Notaries
Public in Ireland was appointed Taxing Master in March 1969.  They lived at Charton on
Kerrymount Avenue, Foxrock.   He was a fellow of the Royal Irish Academy of Music and an
internationally recognised expert on Chopin and on the Irish composer John Field.  He was a
composer, writer, artist and sculptor who had a number of exhibitions in Dublin.