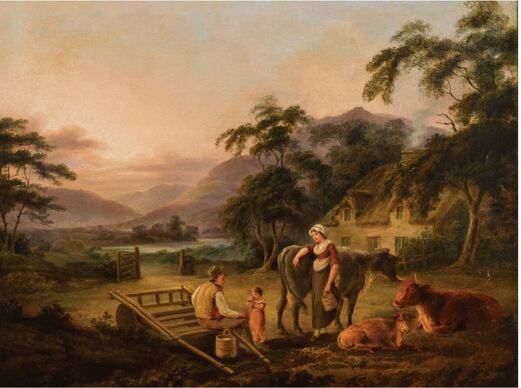 Thomas Mulvany, a landscape painter married Mary Field, daughter of Dr Cyrus Field.
Thomas and his brother, John George (1766 -1838) were among the first members of the
Royal Hibernian Academy and William was Keeper of the Royal Hibernian Academy until
his death.  He died on 26 Feb 1845 at Dirker House, Cross Avenue, Booterstown and his
book on the life of his friend James Gandon was published after his death.  His sons were
very involved in both the Moore and Dargan testimonials.

1              William Thomas Mulvany, eldest son born 11 Mar 1806 at Sandymount, was a
pupil of both Francis Johnson and John Semple.  He married Alicia Winslow,
daughter of Daniel Winslow of Cloghan Co Fermanagh at Kinawly Church on
28 May 1832.  He was acting engineer for the Shannon Commission and resigned
this post when he was appointed, Assistant Commissioner for Drainage of Land,
and Improvement of Navigation and Mill-power, in 1842.  He lived at Dove House,
Newtown Avenue, Blackrock from 1841 to 1847 before moving to Dundrum.  By
1849 he was Commissioner of Public works and living at Dundrum Lodge, Wickham,
Dundrum.  He was vice president of the Institute of Civil Engineers of Ireland in
1854.  After a quarrel with the administration he received a redundant allowance
and moved to German in 1855.  He founded the Hibernia Coal Company and the
Shamrock Coal Company.  He also founded the Erin and the Emerald Coal companies
and retired in 1864 after which he was made Ehrenburghen (freeman) of
Gelsenkirchben.  He died 30 Oct 1885.

2              George Francis Mulvany born circa 1809 was a painter exhibiting in Dublin from the
late 1820’s, a frequent exhibitor at the Royal Irish Academy.  A clever artist, his portrait
of Thomas Moore in 1835 was considered a great likeness and an engraving of it made.
He was elected keeper of the Royal Hibernian Academy in place of his father in 1845.
He was subsequently involved in the establishment of the National Gallery of Ireland
and was the gallery’s first director in 1862 and is for this reason that he is significant in
Irish art history rather than for his own artistic output.  He married Maria McNamara,
eldest daughter of Thomas McNamara on 1 Jul 1848 in a double wedding.  He died on
6 Feb 1869 and was buried at Mount Jerome.

3              Richard Field Mulvany baptised at St Paul’s Dublin on 24 Feb 1811.  He married
Harriet McKenna, daughter of the late Neal McKenna at Booterstown on 2 Aug 1841.
He was employed by the Board of Works of Clare and Limerick before becoming the
proprietor the newly established Newspaper The Dublin Advocate – Irish Industrial
Journal - Dublin in 1848.  He was the manager of the Irish Art union in 1854 but was
declared insolvent later that year.  He was secretary of The Dublin Trunk Connecting
Railway Company in 1865 and was living at Bishopsgate Street in London. He died at
11 Luxor Street Camberwell on 3 Aug 1878.  Harriette died in 1907 at Lambeth.

4               John Skipton Mulvany, fourth son born circa 1812 was an architect.  He was in
private practice from 1836 when he was commissioned to design an extension
to the Hotel at Salthill, Monkstown for the Dublin & Kingstown Railway.  He was
a close friend of William Dargan and architect to the Midland Great Western
Railway Company by 1845.  He had offices at 175 Great Brunswick Street from
1847 to 1855.  He was elected to Associate of the Royal Hibernian Academy in
1850 and was a director of the Dublin & Steampacket Company in 1863.  He
married Eleanor Burke, daughter of Joseph Burke of Culloville, Co Armagh on
14 Apr 1846.  He designed the station buildings at Blackrock and Kingstown
and th Royal Irish Yacht Club but is best known as the architect of Broadstone
Railway Station - a neo-egyptian styled building and constructed of granite.  In
1857 he designed new buildings for the Glass Bottle Company at North Lotts.

Eleanor died from consumption at Lakelands, Stillorgan on 3 Jul 1852.  John put the
house and 5 acres up for sale in 1855 retaining some of the farmland.   In 1864 he
built a villa for David Malcomson at Dumore with the builder Mathew Lynch and in
the same year built a mansion for John Malcomson on the river Suir with builder
Mr Ryan.  John was involved in designing  the alterations for Kilmacud House on
the upper Kilmacud Road for friend Robert Hoey and Mountanville for William
Dargan.  He also designed Hazelwood House on the Upper Kilmacud Road and in
1861 he designed the reconstruction of Leopardstown Park House for Charlotte
Malcomson.  John was also a miniaturist painter and his miniature of John Gilbert,
historian was bought by the National Gallery of Ireland in 1933.  John died
10 May 1870 and was buried at Mount Jerome.  For details of his works and career
see the Dictionary of Irish Architects, DIA.

5               Thomas John Mulvany youngest child born circa 1821 was a civil engineer and was
an assistant engineer of the Shannon Commission in 1846.  He married Ellen
McNamara, second daughter of Thomas McNamara on 1 Jul 1848 in a double wedding.
He worked for his brother William in Germany before he immigrated to New Zealand
where he worked as a market inspector for the Borough of St Kilda.  He died 25 Jul 1892
at Bay View, Kati Kati.