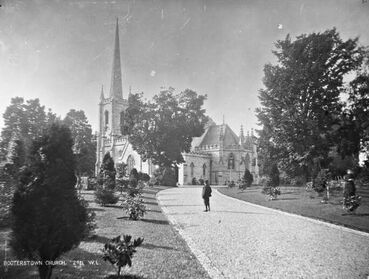 
Godfrey Bateman son of John Bateman married Frances Emily Scanlon, daughter of Matthew
Scanlon of Woodford cottage, Listowel at Listowel Parish church on 26 Apr 1881.  Godfrey was
an Inspector of Schools and had a masters in Mathematics.  Godfrey presented the IRFU with
a cup in memory of his two son killed in WW1.  This cup is still played for annually between
the four provincial cup winners.

1              Frances Emily Bateman born on 11 Mar 1882 at Woodford, Listowel, Co Kerry.   Frances
served as a VAD with the Red Cross during WW1 and was mentioned in dispatches.  She
married Parsons Henry Jermyn of 26 Mount Merrion Avenue and son of Charles Thomas
Jermyn on 20 Aug 1919 at the Mariners Church, Kingstown.  The couple lived on Mount
​                Merrion Avenue with their five children.

2              Reginald John Godfrey Bateman born 12 Oct 1883, at Square Listowel.  He attended Trinity
College, then moved to Canada.  He was a Professor of English at the University, Saskatoon.
He attained the rank of Captain in the Canadian Infantry.  Reginald died on 3 Sep 1918
at Dury, Hindenburg Line,  France.  He is remembered on the Vimy Memorial, Pas de Calais,
France.

3             Ernest Maunsell Bateman born 28 Oct 1886, at Square Listowel, County Kerry.  He attended Trinity.
He married Margaret Webber Smylie, daughter of John Dryden Smylie, Rector of St Luke's Church
Dublin on 5 Jun 1912.  He took holy orders and was appointed curate of Taney in Dundrum in 1913 .
He moved to Zion Church, Rathgar in 1921 becoming Rector of St James, Dublin in 1923.   He was
appointed Rector of Booterstown (SS Philip & James) in 1933 living at The Rectory on Cross Avenue.
He was Professor of Pastoral Theology, Trinity College, Dublin from 1940 to 1944 and appointed
Canon in 1957 and retired in 1965.  On his retirement they moved to Frankfort Lodge on Mount
Merrion Avenue.  Margaret died 19 Mar 1968 and Ernest died 8 Apr 1979, both were buried at
St Brigid's' Stillorgan.

4              Edgar Noel Bateman born on 25 Dec 1888 at Square, Listowel.  He graduated Trinity in 1909 and
immigrated to Australia and enlisted in 1916.  He served four years rising to the rank of Major
and received an OBE for distinguished Medical Service.  Edgar married Olive Lilian Keown and
resided in Australia.  They had two children Dr Bateman died on 15 Mar 1930, at Mount Barker
survived by his widow, son and daughter.

5             Arthur Cyril Bateman born 31 Oct 1890, in Bailieboro, Cavan.  He graduated Trinity with a degree
in medicine. He was an Irish cricketer representing Ireland against Scotland in 1913 and 1914.  He
enlisted and was awarded the Military Cross in 1917.  Surgeon Captain Arthur Bateman was
wounded and taken prisoner and died in enemy hands near Arras, France.  The War Office quoted
his Colonel as follows: 'Captain Bateman manfully stuck to his post until the Germans were within a few
yards of him, when he started to retire along with his orderlies.  Unfortunately he was hit, and fell into the
hands of the enemy, it will be difficult for any other M. O. to fill his place'.  Arthur is commemorated on
​               the Pozieres Memorial, Somme, France.

6              Godfrey Bateman born 20 Aug 1892, at 10 Lower Mallow Street, Limerick, Godfrey became a
medical doctor.  He enlisted in the Royal Army Medical Corps and served in France in 1915.  He
married Evylin Maude Lindsey, daughter of William Lindsey at Templemore Parish, Derry on
9 Nov 1916.  They resided in Coleraine and they had seven children.  Godfrey died on 8 June 1942
at Sir Patrick Dun's Hospital, Dublin.

7               John Victor Bateman born 11 Jun 1897 at Eden Tce., Limerick attended Trinity and was a lecturer
there.  He played rugby and was a member of Pembroke Swimming Club.  He moved to Canada
and took a post in the Department of Philosophy at the university of Saskatchewan.  He was
awarded a doctorate by Edinburgh University in 1934.