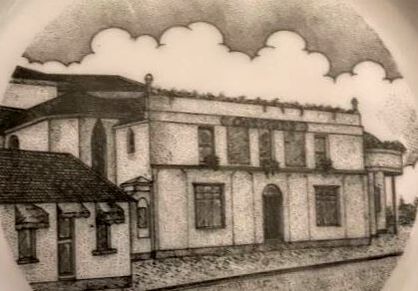 James Joseph Boland born circa 1862 on County Wexford, son of Denis Boland and Bridget
O’Leary married Mary Anne Cullen, second daughter of Christopher Cullen, publican of Cullens
Public House, Stillorgan married at Kilmacud Church on 17 Jan 1893.
​
James was from County Wexford and was working and living at 80 Grafton Street on the corner
of Johnson Court from 1889 to 1893.  He was a grocer and wine, spirits and tea merchant.  He
also had Goatstown House a licensed premised from 1890 to 1891.  He opened Stillorgan House
at the top of the hill on the corner of Kilmacud Road in 1895.  The licence was transferred to him
from Miss Mary Anne Rydall in 1897.  James had served his apprenticeship alongside Philip
Byrne of Galloping Green.  James died of a broken rib on 4 Nov 1902 and left £800 in personal
estate.  The licence was transferred to Mary after his death.  Mary announced her retirement and
the purchase of Tigh Lorcain Hall in 1925.  She died 19 Jul 1926 at Tigh Lorcain Hall, both are
​buried at Deansgrange.

1            Denis Joseph Boland born circa 13 Oct 1893 at 80 Grafton Street.  He was a medical student
when he married Nora Kathleen Patricia (Paddy) O’Connor on 12 Sep 1912 at Glasthule
Church and they lived at Westfield Terrace, Blackrock. He graduated from the RCSI.  Paddy
died at Westfield Tce on 4 Oct 1917.  Denis was the temporary medical officer based at
Stillorgan Dispensary.  His appointment caused some issues as it was felt he was of military
age and should be on service with the RAMC but he proved he was unfit for military service
and the court case was dismissed.  He died 8 May 1931 at Idrone Tce.

3            James Joseph (Jim) Boland born 3 May 1897 at Stillorgan was a medical practitioner.  He died
a bachelor at Stillorgan Park Avenue on 19 Mar 1976 and was buried at Deansgrange with his
brother Austin.

4           Christopher Austin (Austin) Boland born 10 Aug 1899 at Stillorgan attended Blackrock College.
He took over the running of the pub from his mother.  He died a bachelor late of Boland’s
Stillorgan House, at St Michael’s Nursing Home in Dun Laoghaire on 3 Jun 1964 and was
buried at Deansgrange.