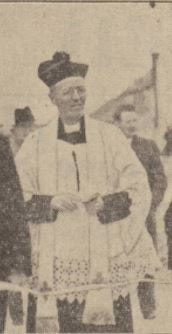 Philip Hickey born circa 1842 son of Andrew Hickey married Bridget Coman at Templenoe, Co
Tipperary in 1874.  Philip was a farmer and Bridget was the daughter of Dan and Johanna Coman of
Bannamore.  The couple had four children, all of whom were alive in 1911.  Bridget was living with two
of her sons in Templenoe, Tipperary in 1911.

The Late Venerable Archdeacon Hickey PP with special permission and facilities from the
Archbishop blessed the bell of the new church in Drimnagh, The Church of the Assumption
which he was instrumental in getting built on 23 Oct 1955.  He was appointed Archdeacon in
April 1956 just a month before his death.  The Ven Archdeacon Daniel Hickey died 3 May 1956
at St Vincent’s Hospital, Leeson Street after 53 years as a priest.  Archdeacon Daniel Hickey was
the first Parish Priest of Crumlin from the foundation of the parish in 1941 until his death in
1956.  His name is on the side of the High Altar at St Agnes n Crumlin which he donated to the
parish.