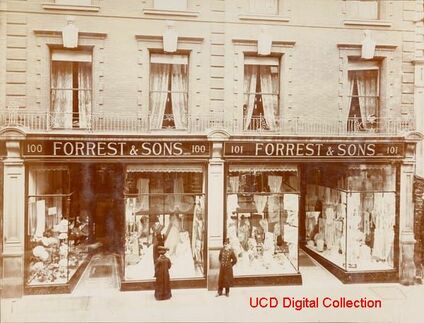 James Forrest a lace manufacturer of Northampton was selling veils, ribbon and shawls from 23 lower
Sackville Street in 1815.  By 1817 he was a silk mercer, catering to the ladies of Ireland.  He traded from
his first shop at 98 Grafton Street as James Forrest & Co from 1817 where he was also a retailer of furs
and gowns from London and Paris.  He married Mary Anne Doyle, the niece of Mr Quin of Bray on
11 Apr 1820 at Bray Church.  He travelled regularly to England and France to select gowns and fashions
for his shop including bombazines and other accessories for mourning.  He announced that he had
new premises at 101 Grafton Street in January 1831.  In 1837 he announced a dissolvement of a
partnership and traded as James Forrest.  It is thought that Ann died at Harcourt Terrace on 4 Oct 1842.
They exhibited Limerick lace at the RDS in 1847 and by this time were trading as James Forrest & Son.
James moved to Roebuck House (now Roebuck Court) circa 1850, a keen gardener, he won many
awards for his farm produce and plants.  James died 17 Dec 1866 at Roebuck House, was interred in
Mount Jerome and left 37K in personal estate.  The business he ​founded went into voluntary
​liquidation in 1929.
​
1                James Quin Forrest born 24 May 1822 was educated at King Williams College on the Isle of
Man until 1837.  He and was a member of the RDS from 1877 and a JP.  He married Edith
Green, fourth daughter of Edward Unsworth Green a Wine Merchant and Sarah Parker of
Worcester, England on 13 Feb 1851 at Claines, Worcester.  The Forrest family were Silk
Merchants with premises at 100/1 Grafton Street in Dublin, supplying ‘Fancy Tulle and
Tarleton Dresses, Sylphide Wreaths and Head-dresses’ for the Lord of Wales.  By 1849 they
were the proprietors of Abbey Court Lace Factory in Limerick, employing 450 girls having
purchased it from William Lloyd. They lived at Nullamore in Milltown from 1873 to 1879
before moving to Thornhill, Stillorgan in 1887.  James died 29 May 1905 at Thornhill,
Stillorgan and left 43K in personal estate.  Edith died 8 May 1916 at Aberdeen House, Clyde
Road, the home of her daughter Jessie.  Both are interred in the family vault at Mount
​                  Jerome.

3             Jessie Margaret Forrest born circa 1857 married Joshua Carroll Manly son of
Thomas Manly and Mary Anne Carroll by special licence at 43 Fitzwilliam Place on
22 Nov 1882.  Joshua was clerk to the Pembroke District Council and they lived at
Wellington Road before moving to Clyde Road after the death of Joshua's father.

4             James Forrest eldest son born 29 May 1859.  Lt Col James Forrest CMG, OBE of the
Lincolnshire Regiment died 28 Nov 1939 at Lymehurst, Blackrock.  His funeral service
was held at SS Philip & James in Booterstown and he was buried at Mount Jerome.

Thomas secondly married Marrianne Jones, daughter of William and Margaret Jones
of Rathgar at Rathmines on 15 Dec 1868.   Thomas Alfred died at his residence 1
Sandycove Avenue on 17 Apr 1894 aged 65 and Marrianne died 11 May 1905 aged 73.
Both are buried at Mount Jerome.