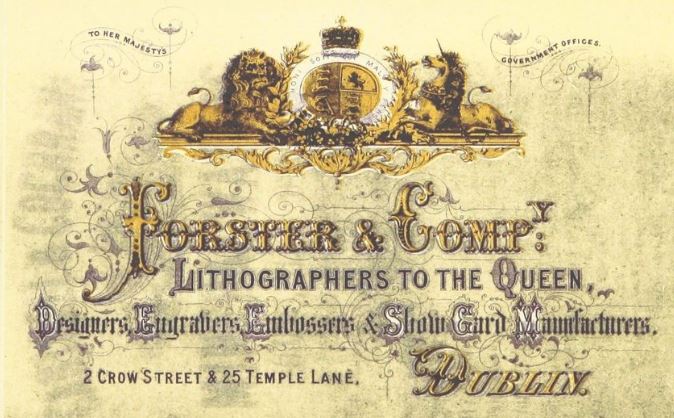 John Forster, youngest son of Thomas Forster, litho graphic and seal engraver to the public offices of
2 Crowe Street.  John was a lithographer of 2 Crow Street and worked with his father and his brother
William. He married Mary Minchin at Enniscorthy on 29 Apr 1854.  Mary was a minor, the youngest
daughter of Ambrose Minchin.  She was the niece of Henry Goodisson and was resident at
Kilcormuck.  Witnesses Samuel Goodisson and Henry Goodisson.  In 1859 a fire destroyed the
premises at Crows Street, they were insured and their claim was paid and the reopen at 2 Crow
Street and 25 Temple Lane as Chromo Lithographers, Engravers and Copperplate Engravers and
Copperplate Printer to HM Public Offices.  John and Mary lived at St Mary’s Temple Road, Rathmines
after their marriage.  His brother went to America in 1872 and John carried on the business alone.  He
engraved and printed Forster’s view of Ireland.  The company went into liquidation in 1887.  The
family were living at Wynnstay by 1888.  They had 13 children of whom 8 survived in 1911.  John died
22 Nov 1900 at Wynnstay.  Mary a widow was living at Wynnstay in 1911.  Mary died 8 Apr 1914 at
Wynnstay and left 13K in personal estate and was buried at Mount Jerome.  She left amounts to both
Henrietta and George.

1               Marie Eleanor Charlotte Forster born circa 1858 married Robert Gow at St Philip’s Church,
Milltown on 21 Sep 1876.  Robert was born in Scotland the son of Alexander Gow, a farmer.
By 1911 Marie is running a boarding house at Mount Street and is living apart from her
husband with three of her eight children who had survived.  It is thought that Marie
emigrated to Australia in 1916 and died there in 1940.

3               John Joseph Minchin Forster born circa 1863 in Co Dublin was a motor and cycle engineer
celebrated his 21st birthday on an employee’s outing in June 1884 to Powerscourt waterfall.
He married Anna Tryphena North on 28 Apr 1892.  Anna was the daughter of Thomas North,
photographer of 6 Moyne Road, Rathmines.  John was a printer living at Wynnstay.  John
died at Bangor on 1 Aug 1948.

4               Henrietta Charlotte Forster born 4 May 1867 at Temple Road, Upper Rathmines christened at
Milltown.  Henrietta married James Gibson Thompson who died in 1908.  It is thought that
Henrietta emigrated to Australia after the death of her husband.

6               Nannie Emily Forster fourth daughter born 10 Jun 1869 at Temple Road, Rathmines married
Alexander Jeffers at Holy Trinity Church Rathmine on 26 Mar 1892.  Alexander was a
commercial traveller and the son of Alex Jeffers.   Annie was living with her two children at
Leeson Park in 1911 and was running a boarding house.  Annie died 12 May 1933 at 4
Connaught Place, Clonskeagh and was buried at Mount Jerome.

11           Robert Benjamin Forster youngest son born 27 Jul 1879 at Temple Road married Muriel Elsie
Hasler at the parish church at Bowdon Cheshire.  Robert was a chemist and university professor.
​                Robert and Muriel were living in Birmingham in 1939 with their two daughter, Lucy and Sheelagh.