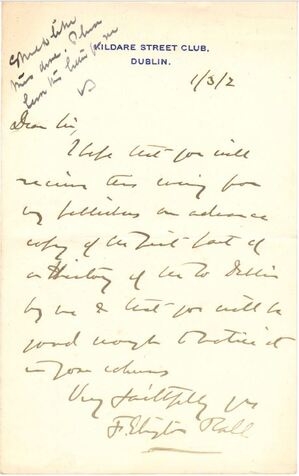 Benjamin Marcus Ball eldest son of Rev John Ball and Penelope Paumier born 11 Mar 1788.  He
joined the army.  He was with the 40th Regiment of Foot, fought in the Peninsular Wars and
attained the rank of Major.  He married Elizabeth Feltus, daughter of Cuthbert Feltus and Jane
Bloomfield of County Carlow on 19 Oct 1814 at St George's Church, Dublin.  Elizabeth died on
28 Mar 1838 at Larchfield House, Dundrum and was buried at Taney.  Benjamin Marcus died
10 Apr 1841 at 27 Charlemont ​Street and was buried at Taney.

2                William Paumier Ball born circa 1858 married Constance Helen Studdert,
daughter of William Steele Studdert, JP and Constance Massy of Co Clare and
the Widow of Lucius Arthur of Glenomar on 6 Oct 1894.  He was called to the
bar in 1883 and was a practising Barrister-at-Law.  They lived at 71 Merrion
Square, Dublin.  Constance died on 17 Jun 1902 and William died 29 Aug 1902
same place, both were buried at Mount Jerome.

3                Francis Elrington Ball third son born 18 Jul 1863 at Portmarnock Co Dublin.
He was a member of the Primrose League as a young man and was its treasurer
in 1887.  He grew up at Taney House and took part in many horticultural
competitions, showing cows and poultry.  He married Florence Eglantina
Hamilton daughter of Canon William Alfred Hamilton and Henrietta Katherine
Cole of Mopoon, in Dundrum on 9 Jul 1897.  He was the author of: - Lives of the
Lord Chancellors of Ireland, The Judges of Ireland 1221 - 1921, The History of
Taney and was conferred with an honorary degree D Litt for his ‘Correspondence
of Dean Swift’.  He was a member of the Royal Irish Academy and a member of
The Royal society of Antiquaries.  He was also a member of the Kildare Street
Club and The Reform Club, Pall Mall.

In 1902 he published The History of the County of Dublin over 7 volumes
updating D’Alton’s History which it is still the standard primer for local history
today.

Florence died in 1913 and was buried at Besselsleigh, Berkshire. Francis lived
at 56 Booterstown Avenue from 1913 to 1919 and moved to Chester in 1920.
He returned to Dublin in 1927 and died without issue on 7 Jan 1928 at the
Fitzwilliam Nursing Home, Pembroke Street and was buried at St Nathi’s,
Dundrum.  He left 17K in personal estate, probate was granted to Miss Lettice
Evoryna Elrington O'Hanlon, his cousin who lived at The Holt, Hook, Hants, to
who he left his residuary property.