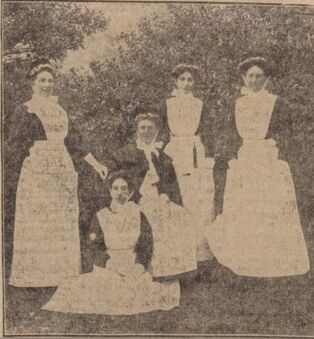 Kate Middleton Curtis kept a diary, in which she recorded her activities for St Johns Ambulance Brigade.  The diary, and other items including photographs and an autograph book, were donated to the Royal Dublin Fusiliers Association Archive.

The memo below sets out the background to the donation.
The complete file can be requested in the Dublin City Archive, Pearse Street, while the Kate Middleton Curtis Collection has been
digitised and is available to view here.

This autograph book was a gift from Nellie A Mills to Mrs Kate Middleton Curtis, Lady Superintendent of the Auxiliary Hospital for Wounded Soldiers and Sailors, Temple Hill (or Neptune) House, Blackrock, Co Dublin a preserved though now almost derelict house down to the left as one turns from Temple Hill, Blackrock onto Monkstown Road, originally the home of John Scott, 1st Earl of Clonmell, up to his death in 1798.

It is donated to the City of Dublin Archive in memory of my grandmother Eileen Meldon, my grandfather Hugh Joseph Hayes, M.C. (a Royal Dublin Fusilier), and my step-grandfather William Maurice Middleton Curtis, from whom it came into my possession via my late grandmother, his second wife, and her second husband. The story of their lives is sad, romantic, spans two world wars, as well as our own war of independence and the setting up of the new Irish state.

The Auxiliary Hospital was under the auspices of the St John Ambulance Brigade, City of Dublin Nursing V.A.D. (see letterhead). The 69 entries generally give the name, number, regiment, and place and date where wounded, from 23 August 1914 to March 1915. There are several illustrations, and many photographs of the residents and staff, none of which have been identified, other than Mrs Curtis herself. A list of names is attached.

The accompanying handwritten record dating from May 1912, is a record of (her) Brigade activities by the author, clearly the same Mrs Curtis, who writes that she is the ‘oldest ambulance Lady in Ireland’. A note of 29 August 1914 says that her ‘unit’ is given permission to take over a convalescent home; she was then authorised to secure one herself, which she did – Temple Hill House, by kind permission of Mr Power, keys handed over on Sept 19th 1914. The copybook breaks off on 20th November 1915 with no specific explanation, though much can be deduced from the later entries.

Eileen Meldon and Willie Curtis were a young courting couple as the world drew close to war early in 1914. Her mother, Harriette, was active in the Red Cross, his in St John Ambulance. Hughie Hayes had spent some years adventuring in Canada, before returning to take a commission in the Royal Dublin Fusiliers in January 1914. The Meldon and Hayes families had been close neighbours at 15 and 18 Merrion Square North respectively. The extended Meldon family, paterfamilias James Dillon Meldon (1803-1883) consisted in 7 sons and 9 daughters – 5 of the 7 sons followed in their father’s footsteps into the legal profession. In the next generation, the young Meldon men distinguished themselves in sporting and military, medical and legal fields.

James A Meldon (1870-1930) was the eldest son of Dr Austin Meldon, (immortalised by James Joyce in Ulysses) and had taken a commission in the Royal Dublin Fusiliers in the late 1890s. He was serving in Central Africa as a combatant officer at the time of his father’s death in 1904, was appointed RM on 28 March 1914 in Mayo, stationed in Ballina. He served in the Special Reserve of Officers, 4th Batt. Royal Dublin Fusiliers for the duration of World War 1, promoted to Lieutenant-Colonel in 1915, was awarded the CBE in 1919. Maurice Healy in Stay Me With Flagons, (1940) wrote: “… the hospitality of my Colonel in the Royal Dublin Fusiliers, the late Jim Meldon, the handsomest, most generous and in every way the most typical Irishman I ever knew, God rest him.”

Hugh Joseph Hayes (1882-1957) was the youngest son of 5 sons and 4 daughters of Dr Patrick J. Hayes who died just 2 weeks after Dr Austin Meldon in 1904 – both men having had distinguished medical careers in Dublin. Hughie’s 8 years of service in the Royal Dublin Fusiliers earned him the Military Cross at the battle of Le Cateau, French Flanders, on 17th October 1918. In March 1917 he had married Eileen Meldon, the young cousin of Jim Meldon, much to the delight of both families. He joined the VR under agreement with Col. M. Demphy in July 1922, as an Instructional Officer in the Curragh Command – he finally resigned his Commission in 1929 (copy of military records attached). The military life though was in his blood and when war broke out in 1939 he offered his services again, and through the good offices of his older brother RAMC surgeon Jim Hayes he was seconded to the Royal Air Force (Canada) ground staff as Flight Lieut., until 1946.

He was more fortunate than his first cousin Charles Bianconi Hayes of Lansdowne Road, Ballsbridge who, serving in the Hampshires, lost his life in Gallipoli and is commemorated in St Mary’s Church, Haddington Road and on the Helles memorial in Gallipoli.

The war-time marriage of Eileen and Hughie, blessed with two daughters – both still living – ended in legal separation some ten years later.

The teenage affection between Eileen and Willie Curtis subsequently blossomed into mature love, which finally resulted in their marriage in October 1965, both then widowed, aged 68 and 71 respectively. They enjoyed four blissful years of marriage.

Willie guarded safely these documents of his mother’s, and Eileen ensured that they were among the few items she retained up to her death in 1994, at which time they came into my safekeeping. It is my pleasure to present them to the Dublin City Archive, along with the military records of Hughie Hayes (see accompanying CD).