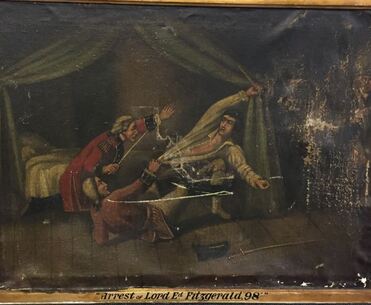 1                 Henry Charles Sirr born Dublin 25 Nov 1764 son of Town Major Joseph Sirr and
Elizabeth Hall.  He was nephew to Frances Sirr who had married Archibald Elliott,
He served in the 68 Regt of Foot, from 1778 making lieutenant in 1780.  He
attained the rank of Captain and acted as ADC to Lord Heathfield, George Eliott and
the Governor of Gibraltar and his aunt's brother in law.  It was in Gibraltar that he
became acquainted with Lord Edward and James Fitzgerald.  In 1791 he was a wine
merchant of 35 French Street and married Eliza D’Arcy, daughter of James and
Martha D’Arcy of Hydepark, Co Westmeath.  He joined the 1st Regiment of Royal
Dublin Volunteers in 1796 and was appointed assistant town major the same year.
He was appointed Town Major in 1798 and was living at Dame Street.  He wounded
Lord Edward Fitzgerald of Frescati House, the Irish patriot, during his arrest and
Fitzgerald subsequently died in 1798.  He was also involved in the capture of
Robert Emmet.  He arrested nearly every one of the United Irish Leinster provincial
division in one fell swoop at Oliver Bond’s warehouse, opposite the Brazen Head
tavern.  A man doing the job he was paid for by the government or a zealot?  A man
equally feared and hated by the general public for reason or vilified by the press?
From 1808 to 1815 he was demonised In Watty Cox's The Irish Magazine and was
unpopular and regarded as being too heavy handed in his approach to law
enforcement.
​
He was churchwarden of Stilloran and rented a pew in Stillorgan Church in 1803 but
this along with his villa in Stillorgan was up for sale in 1804, the house was called
Bueno Vista and it was near Stillorgan Church.  It was described as being on 7 acres
and recently extended with a large parlour and drawing room added.  There was a
pond or rivulet running through the grounds, over which a romantic bridge had been
built leading to a temple and grotto.  It had two coach houses and stabling for 6 horses.
To date this house has not been identified.
​
He retired to the police Magistrates bench in 1808 and retired fully in 1826.  Elizabeth
died 29 Dec 1829 aged 62 and was buried at St Werburgh.  Henry died aged 77
on 7 Jan 1841 at his house in the lower Castle-yard and was buried at St Werburgh a
week later but the headstone visible is for his father who died in 1799.

He was a collector of antiques, curios and paintings.  When his painting collection went
for sale in Manchester in 1843, it was advertised as including works by Joshua
Reynolds and Tintoretto but most were found to be reproductions.

5              Joseph D’Arcy Sirr born circa 1794 graduated Trinity and took holy orders.
He married Eliza Hoare and was rector of Kilcoleman, Claremorris in Co
Galway from circa 1832 until 1844 when he was made Vicar of Yoxford in
Suffolk.  Having resigned the chaplaincy of the Winchester Garrison, he was
appointed as rector of Morestead. The couple had 15 Children.  Eliza died in
1862 and Joseph died 5 Apr 1868.

6             Henry Charles Sirr, younger son born circa August 1807 educated in Switzerland
and graduated Trinity MA in 1833.  A Barrister-at-Law he married Mary Mason,
daughter of the late William Mason of Shepherd’s Bush on 4 Apr 1843 at
St George’s, Hanover Square, London.  He worked on the Southern Circuit of
Ceylon and served as British Vice-Consul at Hong Kong in 1843. An author he
wrote ‘Ceylon and the Cingalese Published in 1850, also he wrote China and the
Chinese, subtitled: "Their religion, character, customs and manufactures; the
evils arising from the opium trade; with a glance at our religious moral, political
and commercial intercourse with the country."  He secondly married Louisa Rix.
Henry died in 23 Sep 1872.