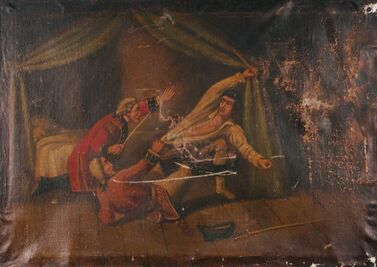 ​The FitzGerald Family of Frescati

The Duke of Leinster apparently said that wherever he went to live, others would follow.  He
married Emily Mary Lennox  in London on 7 Feb 1747. They took up residence in Frescati
and were followed.  He was styled Lord Offaly until 1744 and known as the Earl of Kildare
between 1744 and 1761 and as The Marquis of Kildare between 1761 and 1766.  He was
an Irish nobleman, soldier and politician and died 19 Nov 1773.

Emily, Duchess of Leinster secondly married William Ogilvie by April 1774   Ogilvie was from
Scotland and was tutor to her sons.  They continued living at Frescati and they had three
children together.  William was the Chairman of the Blackrock Association while they were
living at Frescati in 1782/3.   Emily died in London on 27 Mar 1814 at Grosvenor Place London.

2            William FitzGerald, second son born circa 1749 became the 2nd Duke of Leinster.  He
married The Hon Emilia Olivia Usher St George in 1775 and had at least nine children.
He was a supporter of Catholic Emancipation and helped to found the Catholic
seminary at Maynooth in 1795.  He withdrew from parliament  with Grattan in 1797 and
moved to England for a time.  He died at Carton on 20 Oct 1804.

12             Lord Edward Fitzgerald born 15 Oct 1763 at Whitehall London spent his summers at
Frescati.  He joined the British Army in 1779 and was Aide-de-camp to Lord Rawdon during
the American Revolutionary War. He represented the borough of Athy as a Member of
Parliament in 1783.  In 1793 he married Pamela Sims in Paris.   The common belief is that
Pamela was the illegitimate daughter of Madame de Genlis and Louis Philippe II, Duke of
Orléans.  The couple lived for a time in France and at Leinster House, Castletown and
Carton but Frescati was their favourite home where Edward had spent his childhood
summers.

In April 1798 Lord Edward was appointed Lieutenant General and Commander and Chief of
the United Irishmen.  An Irish rebel, he was renowned for his gallantry and courage and
was a leading conspirator behind the uprising of 1798 against British rule in Ireland.   The
insurrection was set for 23 May 1798 but on 9 May 1798 a reward of £1,000 was offered by
Dublin Castle for his apprehension.  Edward went in to hiding and was in bed at the house
of Nicholas Murphy in Thomas Street when Major Sirr accompanied by a number of soldiers
entered his bedroom (as depicted in the above contemporaneous painting).   In the ensuing
struggle Fitzgerald was wounded and imprisoned.  He died of what is thought to have been
blood poisoning at Newgate prison, Dublin on 4 Jun 1798 and was buried at St Werburgh’s
church.  Lady Pamela fled to England with the children and stayed at Thames Ditton with
her brother in law Henry.  Forced out of England, suspected of being involved in the united
Irishmen, she fled to Germany. She took her daughter Emily with her and left Lucy and
Pamela with Lady Sophie Fitzgerald in Thames Ditton and her only son Edward with the
Duchess of Leinster.  In 1800 she married John Pitcairn, the American Counsel in
Hamburgand and had a further two children.  Pamela died 8 Nov 1831 at the Hotel de Danube
in Paris aged 56 and was buried at Montmartre Cemetery in Paris.  Her remains were exhumed
and transferred to England and re-interred in the Churchyard of  St Nicholas, Thames Ditton.

From the headstone
'Lady Edward Fitzgerald’s remains were removed from Paris by J.P. Leonard Esq. and interred here
the 21st of August, 1880 by her grandchildren. The above stone was on her tomb at Montmartre
Cemetery and was broken by the bursting of a shell during the siege of 1870.'
​
1    Edward Fox Fitzgerald born circa 1794 attended Eton and then to Marlow Military College,
and  joined the 10 Royal Hussars.  After the reversal of the Act of attainder, he inherited
some of his father's property and married Jane daughter of Sir John Dean-Paul.​  They lived
in Paris for much of their lives with their daughter Pamela.

2    Pamela Fitzgerald born circa 1795 was an author of children's books.  She also wrote two
novels for adults: Martin Tobin (1864), a love story set in New Zealand; and A Woman's
Confession (1867).  In 1820, she met the widower Major-General Sir Guy Campbell in
Scotland and they married in November Sir Guy, 1st Baronet of St Cross Mede entered the
army in 1795, served in the Peninsula campaign (where he was wounded), and fought at
Waterloo.  That same year, he was created a baronet for his service.   They moved to
Ireland in 1830 and she continued living there after Sir Guy's death in 1849.  The couple
had a large family of three sons and seven daughters in addition to the daughter from Sir
Guy's first marriage.  Sir Guy was Deputy quartermaster-general in Ireland in 1830, and
was promoted major-general in 1841, receiving command of the Athlone district.  On
24 October 1848, he was appointed colonel of the 3rd West India Regiment, he died
suddenly on 26 Jan 1849 at Dun Laoghaire.  Pamela was a renowned as a great
conversationalist due to her wealth of anecdotes about the leading celebrities of Europe,
such as Wellington, Lord Byron, and Thomas Moore, whom she had met over the course of
her life.  Pamela died 25 Nov 1869 and she was buried at St. Nicholas, Thames Ditton, Surrey.

3    Lucy Louise, youngest daughter born circa 1798 married Captain George Lyon of the Royal
Navy  on 5 Sep 1825 at Thames Ditton which was where her Uncle Henry lived.  Lucy died
September 1826 and was buried at Thames Ditton graveyard on 2 Oct 1826.