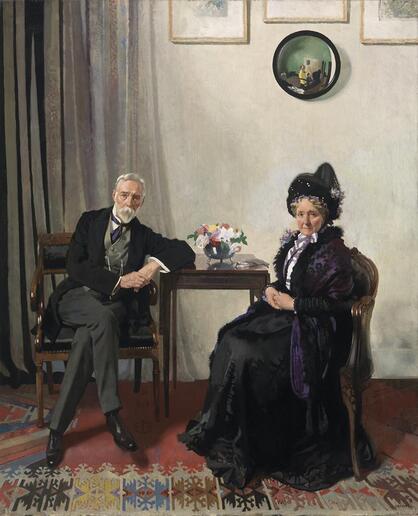 Richard John Theodore Orpen of North Great Georges Street and Ardtully, Co Kerry.  He went on
a grand tour with his brother Charles in 1817/8.  He practiced as a solicitor in Dublin and was
President of the Incorporated Law Society from 1860 to 1876 and knighted in 1868.  He spent
much of his spare time in his later years tracing the history of the Orpen family.   He married
Elizabeth Stack, the daughter of the Rev Richard Stack in 1819.

5               Arthur Herbert Orpen, M.A.,  born 29 Dec 1830 married  Anne St George Caulfeild (born
15 Sep 1834 at Hesse-Nassau, Prussia).  Annie  was the daughter of Ven Charles Caulfeild,
who is featured on a 1$ commemorative stamp issued for the 150th Anniversary of the
Anglican Diocese of the Bahamas and The Turkes & Caicos Islands and the establishment
of the City of Nassau.  In 1861 Queen Victoria designated the Bahamas a Diocese of the
Church of England, and the Archdeacon of the Bahamas, the Venerable Dr Charles
Caulfeild was named the first Bishop of the new Diocese.

Following the wedding of his daughter Annie to Arthur Herbert Orpen in St George's Church
on the 3 Oct 1861, Archbishop Charles Caulfeild left for his new job as Bishop of Nassau in
the Bahamas in May 1862.  He sailed to New York on what was to be the last Cunard paddle
steamer to cross the Atlantic but missed his connection to Nassau and was forced to charter
an American clipper ship named "The wild Pigeon" to complete the journey.  Three months
after arriving in Nassau he died of yellow fever along with three of his nieces.

2            Richard Francis Caulfeild Orpen, BA, RHA, born 24 Dec 1863 at Oriel, Stillorgan.
He was an architect and the youngest ever president of the Royal
Institute of Architects of Ireland from 1914-1917.  He was Architect to
Christchurch in 1910.  His work  includes the Dublin Dental Hospital in Lincoln
Place and Alexandra College in Earlsfort Tce (since demolished).  He is considered to
be "The originator of the bungalow in Ireland and built quite a colony of pretty red
tiled gabled houses in Foxrock"  - Irish Builder 27/8/1904.  He was a skilled artist,
draughtsman and cartoonist and was able to draw simultaneously with both
hands.  He married Violet Caulfeild, the daughter of Robert Caulfeild on
7 Mar 1900.  He oversaw the interior remodelling of St Brigid's Church, Stillorgan.
He died 27 Mar 1938 at Coologe in Carrickmines, a house that he had designed for
himself and Violet.  Violet died 18 Nov 1955.  They had no children.  Richard and Violet
were buried at Deansgrange.

3            Charles St George Orpen born 12 Dec 1864 at Oriel, educated Columba's College,
and MA Trinity married Cerise Maria Darley on 27 Aug 1901 at St Brigid's Church
Stillorgan.  Cerise was the daughter of John Henry Darley and Mary Cerise Lees
of Ferney, Stillorgan.  Charles was a solicitor in the firm of Darley, Orpen &
McGillycuddy of Kildare Street and was a President of the Incorporated Law Society.
He played Hockey for Three Rock Hockey Club and was capped for Ireland.   A keen
golfer, he was president of Foxrock Golf Club in 1935.  Cherrie joined the Red
Cross at the outbreak of WW1.  She worked over 1300 hours at Cabinteely War
Hospital Supply Depot and over 700 hours at the garrison buffet in Dublin.  She
worked many socks & garments for the front using her needlework skills.
Charles died 5 Mar 1939 and Cerise died Good Friday 7 Apr 1950.  Both were buried
at Deansgrange.

5     Beatrice Orpen was born 7 Mar 1913 at 9:00 at Lisheens, Carrickmines and
baptised on 20 Apr 1913 at Tulllow Church.  She was educated at home with
a governess before attending the French School in Bray and Alexandra College,
Dublin married Chalmers Edward Fitzjohn Trench 5 Jul 1940 at Tullow Church.
She was a member of the ICA but is best known as a landscape painter.

5           Arthur Herbert Stack Orpen born 27 Jul 1872 at Oriel, Stillorgan.  He served as a
lieutenant in the Royal Army Service Corps attached to the  Intelligence Corps in
WW1.  He was head of a firm of Solicitors Orpen & Sweeny and President of the
Incorporated Law society 1924-25.  He was a secretary of the select vestry for fifty
years and a lay representative for the parish of Stillorgan in the Diocesan Synod.  A
keen hockey player he was a member of Three Rock Hockey Club.  He married Frances
Ellen Murphy the daughter of James Joseph Murphy, 1st Baronet of Altadore who
was a steamship owner and chief partner in Palgrave Murphy & Co and Brigid Jane
Norman on 7 Jan 1926 Holyhead, Anglesea, Wales.  Arthur was on the board of the
Royal Bank of Ireland.  He died 15 Sep 1953 at Brooklawn, Stradbrook and was buried
at St Brigid's Stillorgan.

His wife Frances Ellen died 27 Apr 1956 and is buried with her parents in Deans
Grange Cemetery.  Ellen left an estate valued at 23K and  the portrait of her
husband's parents painted by her brother in law Sir William Orpen she bequeathed
to the National Gallery of Ireland.

He was a popular and commercially successful painter of portraits for the well-to-do
in Edwardian society.  During WWI, he was an official artist sent by Britain to the
Western Front where he produced drawings/paintings of soldiers, the dead and
prisoners of war.

Twenty years after his death the director of the Tate Gallery, John Knewstub M
Rothenstein, who was a nephew to Orpen by marriage, published 'Modern English
Painters' which included a very negative lenghty piece on Orpen.  While appearing
on the surface to be objective, it criticised every aspect of his work and was bitterly
scathing of both his personality and intellect.  This had a huge influence on the art
world and for many years Orpen was largely forgotten about.  All this changed when
the 1981 biography by Bruce Arnold revived interest in Orpen and was further
consolidated when Dominic Lee, in conjunction with the Stillorgan Chamber of
Commerce, arranged for a sculpture to be commissioned and installed in his
birthplace Stillorgan in 2018.

​6              Cornelia Susanna Sarah Orpen born c1831 lived at Park Villas, Stillorgan for a number
of years with her sister Elizabeth Ida.  She died unmarried on 31 Mar 1916  at The Palace,
Limerick, the residence of her brother Raymond.  Her nephew Arthur H S Orpen was her
executor.

11             Right Rev Raymond d'Audemar Orpen born 27 Aug 1837 married Sara Lucinda
MacGillicuddy 1 Oct 1857 and had four children.  He was a curate at Rathronan and then
Adare before becoming the Incumbent of Tralee.  He was Archdeacon of Ardfert until his
ordination as Bishop of Limerick, Ardfert and Aghadoe in 1907.