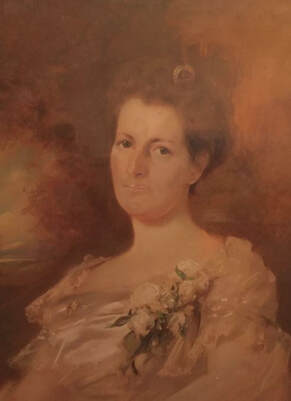 John Henry Darley was a distant cousin of Henry Darley, Brewer of Stillorgan, the grandson of Alderman
Frederick Darley of Fernhill and the brother of Frederick Darley, Chief Justice and Lieut. Governor of
New South Wales.  John married Mary Cerise Lees, the great granddaughter of John Lees of Blackrock
House.  He was Chief Clerk of the ​Court of Chancery and on the committee of the Stillorgan Convalescent
Home as well as a member of the Select Vestry of Stillorgan Parish.  After his marriage to Cherrie they
moved to 11 Ely Place and in 1874 to The Lodge in Foxrock and then to Ferney in 1878 just two years
before his death.

4           Frances (Fanny) Emily Darley born 16 Apr 1872 at The Lodge, Foxrock and died 11 Feb 1969 at
Lonsdale Stillorgan.  She kept a diary and we know that in June 1891 she weighed 9st 7lbs and
her height was 5'8".  She married John Merrick Lloyd of Croghan House, Roscommon on
5 Jul 1900 at St Brigid's Stillorgan.  John died in 1929 and she returned to Stillorgan where she
was involved in community fundraising.  She was a VAD in 1915 and received an MBE in 1920 for
her work at the Boyle Depot during the war.  She received a long service medal from the Queens
Institute of District Nursing service in 1961 having served over 30 years.  She died 11 Feb 1969 at
Lonsdale on Avoca Avenue.  Her funeral service was held at St Brigid's, Stillorgan and she was
​              buried with her husband at Croghan, Co Roscommon.

6           Cerise Maria Darley born 25 Sep 1874 at The Lodge, Foxrock married Charles St George Orpen
on 27 Aug 1901 at St Brigid's Church, Stillorgan.  Charles was a solicitor and they lived at Lisheens,
Carrickmines.   Six chairs in her memory are in  the Baptistry of Tullow Church presented by her
children.  Each chair bears the name and baptism date of one of her children.  Charles died
5 Mar 1939 at Portobello House and Cherrie died Good Friday & Apr 1950.

9            Bernard D'Olier Darley born 24 Aug 1880 at Ferney, Stillorgan.  He attended Trinity College
and The Royal Indian Engineering College (Cooper's Hill).  In 1903 he was appointed assistant
engineer to the Public Works Department in India.  From 1906 to 1919 he surveyed, designed
and built the Mirzapur Canal Systems.  He married Frances Amy Heathcote Arculus on
5 Nov 1908.  He was knighted in Nov 1928 for services rendered in India and was Chief engineer
of Bohawalpur state in the Punjab.  He designed and constructed the Sarda Canal.  He was a
technical advisor to the home office on Air Raid precautions.  He died at Tower Road, Hind Head,
Surrey in 1935.