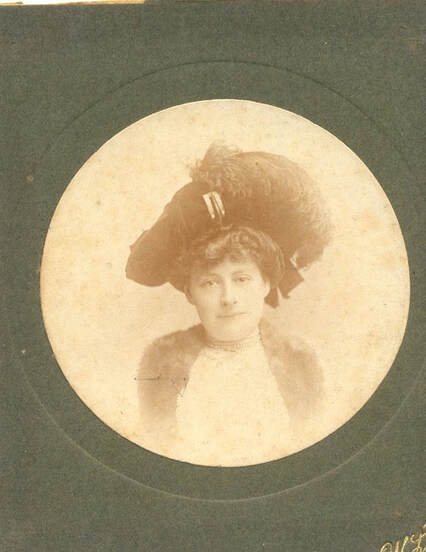 Thomas Hodgen was also a Timber and Rope merchant of Rutland Square with stores at the North
Wall from 1803 to 1829, his son Daniel worked with him from 1821 to 1829.  Thomas Hodgens also
had a glass works in Ringsend from 1824 which was taken over by his son William in 1828.  Thomas
had three houses built at Buckingham Street by John Read, builder/architect in 1831 which
resulted in a court action when Thomas sued the builder.

Thomas died in 1832 and Anne died Intestate at Rutland Square in December 1847 aged 73 and
five months.  Her son William applied for probate but his siblings contested this after some furniture
was auctioned off below price and were concerned as William was insolvent.

1           Henry H John Hodgens baptised Rathfarnham in 1824.  He was called to the bar in
1845 and succeeded to his father’s estates at Kildalkey in Co Meath.  He married Mary
Christina Devereux only daughter of John Thomas Devereux of Rocklands, Wexford
at the private oratory at Rocklands on 25 Aug 1857.  The couple lived at Beaufort,
Rathfarnham and had five children.   Mary died at Beaufort on 12 Aug 1863.

Henry secondly married Mary O'Callaghan daughter of the late Hugh O'Callaghan of
Rosemount Booterstown at Booterstown RC Church on 8 Feb 1866.  Henry had three
further children with his second wife. Henry’s land agent was Mr Stapleton when his
tenants refused to pay rents in 1881.  Henry sold the land to his tenants in 1904.  Henry
died 24 Jan 1911 at Beaufort and left 4K in personal estate.  Mary Josephine died
3 Dec 1919 at 15 Raglan Road.  Beaufort was bought by the Loreto Order in 1925 for use
as a domestic college and school.

2           John Conlan Hodgens, second son baptised 1825 at Rathfarnham.  He was called to the
bar circa 1854 and married Bride Teresa Galavan, eldest daughter of Edward Galavan
of Williams Park, Rathmines on 1 Sep 1857 at Tranquilla, Upper Rathmines.  They lived
at Bloomfield, Rathfarnham.   John died in 1898.

2             Thomas Hodgens junior, born circa 1795 was called to the bar in 1820.  He married Anne Walker,
the only legitimate daughter of the late Henry Walker of 79 Dame Street and heiress to the late
Thomas Walker, lottery and bookseller of 79 Dame Street and of Belgriffen Park at Rathfarnham
Church on 21 Dec 1827 for the second time.  Her fortune was assessed to be between 83K and
100K.  This marriage caused a rift between Thomas and his father, they quarrelled and Thomas
was left nothing in his father's Will.

When Anne was 13 she was in boarding school in Dublin.  She was kidnapped by an employee of
Thomas Hodgens and she and Thomas were married by a degraded clergyman (couple beggar -
Joseph Woods of Smithfield) on 19 May 1820.  For this, Thomas and Anne’s mother,  also called
Anne were incarcerated.  Thomas was freed on the basis that they would not communicate with
each other again.  Thomas broke this agreement and arranged for the kidnapping of Ann while she
was out for a walk from Mrs McDermot's boarding school in Grenville Street.  He took her to London
then Rotterdam and then Paris before returning to Ireland in 1827.  By that time their original
marriage had been nullified by the Consistorial Court and they married in Rathfarnham in 1827.  She
was Protestant and he Roman Catholic.  The couple lived at St Stephen’s Green and had two children.
They parted in 1833, and an acrimonious court battle ensued.  Anne eloped with Patrick Mahon, a
surgeon in the Royal artillery and had two daughters with Patrick.  Anne died in 1870 and left the bulk
of her estate to her illegitimate daughter Penelope Mahon.  Thomas died in 18 Dec 1874 at Bath Ave,
Sandymount and left under £100 pounds.

3             Ellen Hodgens baptised 2 Jun 1796 at the Pro Cathedral married William Hanrick, a provision
merchant, dealer and chapman and had issue.  Ellen died at Grenville Street in May 1856.

George secondly married Anna Louisa Babington Ring, daughter of Thomas Ring of Castleblaney at
Castleblaney C of I on 3 Nov 1840.  George died at 10 Upper Buckingham Street on 27 Dec 1858.
His eldest daughter Elizabeth was the executor of his Will.  He left less than £100 in personal estate.
Anna died in 1876 aged 73.

5            Daniel Hodgens baptised 4 Jul 1798 at the Pro Cathedral joined his father’s firm circa 1821.  He
married Margaret O’Connor at the Pro Cathedral on 27 Nov 1823.  The lived in a house on the
North Wall from 1823 to 1829.  The couple moved to Fortescue Terrace, Rathmines before
moving to Dove House in Blackrock.  Daniel was the owner of a bark called ‘The Thomas’, a
passenger sailing ship which sailed between Dublin and America, it was also used was carrying
timber.  In 1837 Daniel sued his servant for leaving his employment with only one weeks notice,
the servant only returned when threatened with incarceration.  Daniel died circa 1848.

2           Thomas Hodgens, baptised Pro Cathedral 7 Oct 1827 emigrated to Australia and worked in
Victoria as an assayer and borough councillor following the discovery of gold there in the
early 1850s.  He married Mary Anne Flowers in 1856 and they had the following children:
Mary Anne died in 1864.

Thomas Hodgens secondly married on 17 May 1865 in Daylesford, Victoria to Mary
Jane Hunter, born Adelaide, South Australia on 17 Jul 1850 to John Hunter, farmer, and
Mary Henry.  They had 10 children.

Thomas Hodgens died 15 Jul 1893 at Emerald Hill, South Melbourne, aged 65 and Mary Jane
died 25 May 1942 in the suburb of East Malvern.  They were buried with their children John,
Elisabeth and Teresa at the Melbourne General Cemetery, Carlton, Victoria, Australia.

2            Ada Maria Meldon eldest daughter born 22 Dec 1869 at Newtown House living
with brother James in 1901.  Ada married John Mainwaring Andrews of Heswall,
Cheshire on 12 Jun 1906 at the Catholic Church in Llandudno. The family were
living at Heswall in 1911.  John died on 11 Feb 1946 at Monkstown Hospital late of
Grosvenor Hotel, Dun Laoghaire and was buried at Deansgrange.   John left
£700 in personal estate and probate was granted to his widow Ada.  Ada died
at Chatswood, Sydney 9 Dec 1958.

​*  Mothers name is given as both Jane and Anne on the registers of St Michan's, we have presumed that
Anne and Jane are one and the same.

** We would like to thank Dr Margaret Rose & Gay Conroy for their huge contribution to this page.