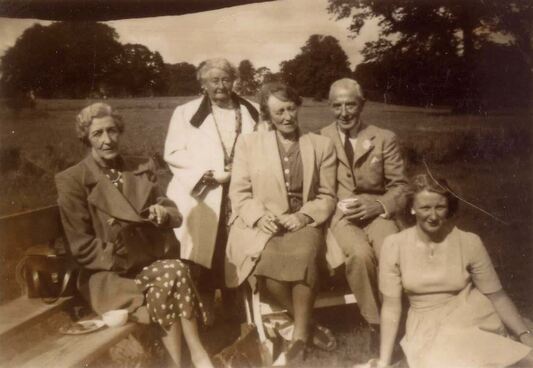 James was an agent to the Commission of Bankruptcy, with chambers at 16 Upper Ormond Quay
and a solicitor of Casino, Milltown/Dundrum and Glencorrib, Mayo.  He moved to Casino,
Dundrum in 1843.  On Christmas Eve 1843 they delivered 150lbs of beef and 150lbs of vegetables
to the Institution of Olivemount, this became a tradition they repeated year on year.  James’ offices
were at 14 Upper Ormond by 1843.  Bedelia hosted her sister Caroline's wedding from Casino
in 1847.  James won prizes for pelargoniums with his gardener Edward Corrigan in 1850 and made a
donation towards the building of Star of the Sea Church in Irishtown.  He purchased land in
Belmont near Tuam and restored it to the former tenants.  He advanced them with money for farm
implements, seed and horses with the help of his agent Thomas Jackson.  He was a generous
supporter of Dublin charities and he worked pro bono for the Sick and Indigent hotel and Inn
keepers charity.  Roebuck Cricket club’s home ground was Casino from 1861 and four of their sons
played.  In 1866 James was a director of The National Building Building and Land Investment Company
of Ireland.  Their town house was 16 Fitzwilliam street and by 1873 they were at 24 Merrion Square.
They were regular attendees at sporting events and attended events at Dublin Castle.  Bedelia’s
clothes were frequently described, rich black or gold dresses embroidered with jet and gold and she
usually wore diamonds.  James died 19 Jul 1887 and  24 Merrion Square was put up for sale in 1890
after the death of Bedelia in 14 Jan 1889.

5                Charles Henry Meldon, third son born 5 Jun 1841 at Rosemount, Roebuck.  He graduated
Trinity and was called to the Bar in 1863.  A barrister at law and of Westland Row he
married Ada Mary O’Brien, widow of Daniel O’Brien and second daughter of William and
Anne Hodgens of Newtown House at John the Baptist Church in Blackrock in 19 Feb 1868.
​
Ada had married Daniel O’Brien, a salesmaster of 45 Smithfield and son of Robert and Bridget
O’Brien at St. Sylvester's, Malahide on 31 Jul 1861.  Daniel died 6 years later 22 Apr 1867 at
Newtown House leaving 20K in personal estate.  Various monies were owed to Daniel at his
death and Ada employed Messrs Meldon Attorneys to act on her behalf to recover the sums.

Charles stood for election in Kildare in 1874 and defeated the sitting Liberal MP Lord Otho
FitzGerald.  He attained silk in 1877 and was appointed a DL.  He was re-elected as a Home
Ruler in 1880, and joined the new Irish Parliamentary Party when it was created in 1882.  He
was president of the Rutland Square Lawn Tennis Tournament.  Charles contracted Anthrax
and died of blood poisoning on 14 May 1892 aged 50 at 25 Rutland Square Dublin and left
2K in personal estate.  He was interred in Vault 40 of the O’Connell Tower Circle.  Ada Maria
died 11 Jan 1898 and was buried at Glasnevin.  She left 18K in personal estate.

2           Ada Maria Meldon, eldest daughter born 22 Dec 1869 at Newtown House, Blackrock
married John Mainwaring Andrews of Heswall, Cheshire (The Wirrall) at Llandudno on
12 Jun 1906.  John was born in Hales in Cheshire circa 1873 and was a cotton
merchant.  The couple lived at River Bank Road, Heswall.  John joined the British
Royal Air Force in 1918 and was granted a temporary commission of 2nd lieutenant.
John died at Monkstown Hospital late of the  Grosvenor Hotel in Dun Laoghaire on
11 Feb 1946 and was buried at Deansgrange.

6             Augustine (Austin) Meldon fourth son born 26 Aug 1843 at Casino baptised at the Pro
Cathedral in 1843.  He became a medical doctor and of 29 Fitzwilliam Street he married
Margaret Ryan, eldest daughter of Patrick Ryan JP and his wife Margaret of Sea View
House, Ballyard, Tralee on 15 May 1867 at St Michan’s, Anne Street.  Margaret died
6 Jul 1870 at 10 Westland Row aged 28 and was interred in the family vault at Glasnevin.

Living at Westland Row, he secondly married Catherine (Kate) Pugin, daughter of
Augustus Welby Pugin, architect (designer of the Palace of Westminster) and Louisa Barton
of 90 St Stephens Green on 15 Jul 1871 at St Kevin’s chapel.  They lived at 15 Merrion square
where Catherine threw lavish balls.   Austin died at 15 Merrion Square and was interred in
Vault 40 of the O’Connell Tower Circle at Glasnevin in 1904.  Kate died 18 Mar 1927, aged 85
and was buried at Glasnevin.

7             Albert Gregory Meldon, fifth son baptised at the Pro Cathedral in 1845 was called to the bar
in 1868.  He married Mary J Doherty, of 10 Merrion Square and only daughter of the late
Bernard Doherty of Londonderry at St Andrews Westland Row on 29 Oct 1873.  Sir Albert of
Vevay House, Bray died 27 Nov 1924 and was buried in the family vault at Glasnevin.

12           Joseph Meldon born 8 May 1859 at Casino.  A solicitor of 24 Merrion Square married Hellen
Pennefather, daughter of William Pennefather and Catherine Scott at the Pro Cathedral on
29 Aug 1887.   James played cricket and captained the Irish cricket team on their tour of America
in 1892.  Joseph and Helen were living at Galway in 1901.