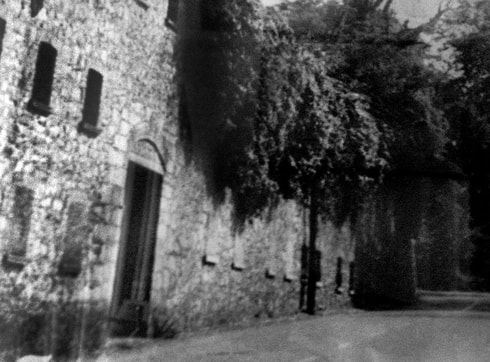 
​'The brewery is a very old building now in ruins in the vicinity of Stillorgan. It is conveniently connected with Dublin by bus and rail. About a quarter of a mile from Stillorgan village on the first turn is this historic building. It was about one hundred and fifty years ago, a brewery and malt was made there, hence it got the name "the brewery". It was working before the Stillorgan reservoir was completed.
It was originally owned by Guinness and Co. Afterwards a certain Mr Darley, who lived in the Grange, which at that time included the place on which the brewery was erected and also the space occupied by the Brewery Cottages, became caretaker. Since then it was owned by the Goodfellows.
Alongside our garden there is a well which was quarried to a depth of eighty feet in solid rock. It is about twenty two feet square, and is fed by a spring. The well was covered with pitch pine beams called joists, which were boarded over to prevent the water getting dirty.
Adjoining it are the ruins of an engine room which contained the pump by which the water was pumped and drawn by another pump in the brewery through pipe in a diagonal line to the malt-house. In this ruins still to be seen are the fire bricks that lined the chimney of the engine room.
A water-main from the bridge was used for washing purposes, not to waste the spring water from the well, and also as there was no Vartry water at the time.
However, malt was made which was not registered and it was smuggled into Dublin at night. At last it was revealed and the brewery was forced to close down.
There was once a public house at the corner on the main road. But the local gentry objected to it and at last it was closed down. This was not supplied by the brewery. I required information from Mrs O'Riordan whose father was chief malster in the brewery. I also received a goodly knowledge from my grand-uncle Mr Patrick Gethings.'
William Licken
Brewery Cottages,
Stillorgan,
Co. Dublin
6th April 1938