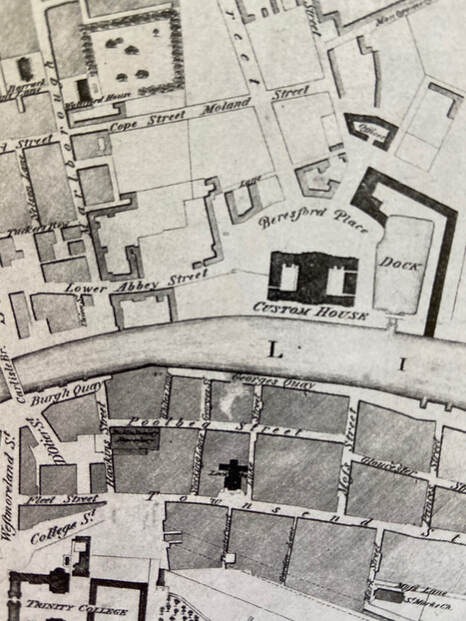 2             George Hill of George's Street was baptised at St Marks Dublin on 17 Jan 1790.  George was a
provision merchant and admitted freeman of Dublin through the coopers guild in 1810.  He
married Mary Guinness daughter of Richard Guinness and Mary Catherine Darley of
Stillorgan on 12 Sep 1816 at Stillorgan.  He had premises at George's Street, and George's
Quay in 1820.  George of Shoe Lane was bankrupt in 1826 and was discharged in 1829.

Mary was left a sizable bequest when her father died in 1829.  George was staying with his
Martha and his brother in law John Brown in Edinburgh when he died 16 Feb 1839 of Dropsy
at 36 Drummond St and was buried at St Cuthbert’s, Edinburgh.  Mary moved in with her
uncle Henry Darley at The Grange after the death of George.  Her sister Frances also lived there.
Mary died at Heytesbury Street on 30 Mar 1846 aged 46 and was buried in the Darley grave
in Stillorgan Graveyard.

1            Mary Guinness Hill only daughter born 28 Jun 1817 baptised at St Marks married
James Smith of Oaklands, Louisiana, USA at Taney on 9 Oct 1839.  She was married from
Prospect in Roebuck where her great uncle Henry was residing.  The marriage licence
was issued to James the previous day and he gave his address as the Gresham Hotel.
Witnesses were Henry Darley and George Hill.

2            Richard Guinness Hill born circa 1829 attended Belmont school in 1835/6.  He was in
Australia in 1841 and married Amy Georgina Burdett on 2 Sep 1852 at the British
Legation in Brussels.  Amy was the youngest daughter of  the late William Jones
Burdette and Sarah Holmes Hodgkinson of Stowey House, Somersetshire, and
Twickenham, Middlesex and the great niece of Sir Francis Burdett and niece of Miss
Burdett Coutts.  They moved from
Brussels to live in Dublin at St Stephen’s Green.  Richard carried on the business of
Malster at Henry Darley old premises at Stillorgan.  Richard was appointed a corn broker
in 1858.  Amy became pregnant for the first time in 1858 but told none of her friends.
The couple left for London on 5 Jan 1859 and travelled by train.  At Rugby, Amy went into
labour as was taken from the train to a small Inn called the Globe at 42 Railway Terrace
and the baby was born later that night.  He was charged with falsifying the birth of his
child, telling his wife that their child was dead and giving the child to a nurse/beggar in
London, so that he could take charge of his wife's inheritance of 14 thousand per year. (If
there were no  children of the marriage he got the lot by way of a marriage settlement).  He
was arrested charged and imprisoned in 1861.  His brother George offered to become
surety for bail to the extent of £1K and he was released.  The court case was dismissed.
Amy died at Kensignton in 1870.  Richard was sued by his aunt Frances Darley of The Grange
in 1862 was non payment of a loan.  Richard was living in Brussels in 1864 and died late of 16
Synge Street on 5 Sep 1871, Portarlington, Queens County and left £1500 in personal estate.

3             George Hill born 25 Feb 1819 in Dublin took Holy orders.  He was living at Halton in Bucks
when he married Emily Frances Daniell, daughter of Thomas Daniell of Berkhamstead and
cousin of Abel Smith, MP of Woodhall on 7 Feb 1849 at St George Hanover Square.  In 1850
George was living at Sobie in Scotland and was chaplain to Lord Galloway, and was appointed
to Sacombe the following year.  George was left the income from lands in Courtlough, Co
Wexford by the Will of Henry Darley.  George died 17 Dec 1884 at the rectory of Sacombe Ware
and Emily died 27 May 1886 at Kensington aged 56.  Both were buried at Sacombe.