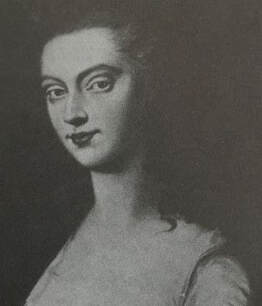 1             Richard Guinness born 6 Sep 1755 son of Samuel Guinness and Sara Jago.  He was
called to the Irish bar on 28 November 1782 and was not opposed to duelling.  He
fought fellow barrister Peter Burrows. Both survived and apparently became friends.
He was described by Jonah Barrington as ‘a little dapper, popular, lisping, jesting
pleader’.  He married Mary Catherine Darley daughter of George Darley and Jane
Johnstone of Mercer Street and Springfield, Kilternan on 25 Sep 1783.  They lived at 9
Mercer Street, Dublin, Barrister which was part of Mary's dowry Richard died
10 Sep 1829 and was buried at Stillorgan Graveyard.  Mary Catherine died at the
home of her daughter Harriette at Westport on 15 Oct 1836.   A painting of Mary
Catherine hangs at Farmleigh in the Phoenix Park.
​
1            Samuel Guinness born 15 Jul 1784 died 27 Jul 1785.

7            Frances Guinness, born 11 Sep 1792.  She was left a lot of property by her uncle
Henry Darley, brewer Stillorgan including the brewery and lands of The Grange
commonly called Dean's Grange or Galloping Green and part of Waltersland, also
No 114 Stephens Green.  She sued her nephew Richard Guinness Hill for
non-payment of a loan in 1863.  She died a spinster on 28 Dec 1888 and was
buried at Stillorgan graveyard.

10           Richard Samuel Guinness born 17 Jun 1797.  He was a barrister and judge and a
great nephew of the brewer Arthur Guinness.  He was educated at Trinity College
Dublin, where he graduated BA Vern in 1818.  Richard was 'universally resented for
his airs and affectations, nicknamed ‘Old Pel’ because the stiff, highly starched collars
he wore forced his chin up, emphasised his pointed nose and made his strut like a
pelican'.  He married Katherine Frances Jenkinson, daughter of Sir Charles Jenkinson,
10th Baronet and his wife Katherine Campbell on 25 Nov 1833 in France.  They
purchased Fairy Hill in 1842, renovated and changed the name of the house to
Deepwell.  They had a second home at 17 Sillwood Place, Brighton, Sussex.  His election
as MP for the Kinsale division ended abruptly in early 1848.  On a petition by the losing
Liberal candidate, W H Watson, a select committee found that Richard's agents'
generous hospitality in providing free drinks for the electorate of Kinsale in Kiley's
public house amounted to bribery.  While Richard was personally absolved, his election
was voided.  He was MP for Barnstaple, Devon 1854 to 1857.  When Richard died on
28 Aug 1857 aged 60 after a long and painful illness and left personal estate of just £100.
He was buried at St Anne’s Dublin.