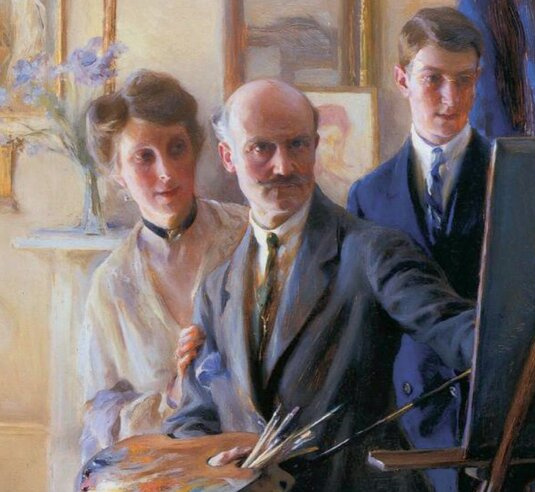 Robert Rundell Guinness was the great nephew of Arthur Guinness (founder of the Guinness
Brewery) and the son of Richard Guinness and Mary Catherine Darley.

1         Lady Mary Catherine Guinness born 12 Sept 1823 at Waltersland, Stillorgan was baptised at
St Brigid's Stillorgan, she married Samuel Ferguson, lawyer and antiquarian on 14 Aug 1848
by Marriage Licence.  Mary was educated at Woodside Cheshire and had a keen interest in
Irish art and archaeology.  Samuel was born 10 Mar 1810 at 23 High Street, Belfast, he was
a rising young poet when they first met.  Mary's first book 'The Story of the Irish before the
Conquest' was published in 1863.  Samuel died 9 Aug 1886 at Howth, Co Dublin and his
biography written by Mary was published in 1887.  Mary died 5 Mar 1905 and both are
buried at Donegore, Co. Antrim.

9      Richard Sidney Guinness born 4 Mar 1873 married Emilie Weimar in 1895, they had no
issue and the marriage was dissolved in 1912.  He secondly married Beatrice Jungman,
there was no issue and he thirdly married Ursula Frances Rose Tremayne.  Richard
died 14 Jan 1949.

1              Henry Seymore Guinness born 24 Nov 1858 at Burton Hall.  He was educated at
Winchester, an engineer, he was a director of the Bank of Ireland and the Great
Northern Railway.  He was a keen antiquarian and genealogist and responsible
for having so many transcriptions of records made, that have since been destroyed.
He also investigated the Guinness pedigree with the help of Gertrude Thrift from
which much of this information is taken from.  He was a Senator of the Free State
He died 4 Apr 1945 at Tunbridge, Kent, his body was repatriated and he was
buried 15 Oct 1945 at St Brigid’s, Stillorgan.  He left 50K in personal estate in
England.

9           Howard Rundell Guinness born 22 Mar 1863 at Burton Hall attended St Columba's
College and graduated from Trinity College Dublin.  He married Mary Alice
Guinness, a distant cousin and daughter of the Rev William Newton Guinness at
Leeson Park on 12 Apr 1887.  He joined his father's banking firm Guinness Mahon
Bank.  The family moved to Chesterfield on Cross Avenue in 1893 where three of
their children were born.  The family moved to Clandon Regis, West Glandon, Surrey
in 1923.  Howard died 9 May 1937.