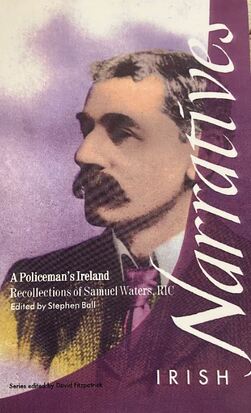 Samuel Waters, son of Abraham Waters and Sarah Hardman nee Walker, and grandson of William
Waters of Co Wicklow, both his grandfather and father were with the Irish Constrabulary.

Samuel Abraham Walker Waters was born in Dublin Street in Dublin, whilst his father was stationed
at the Phoenix Park.  When he was a baby the family moved to Ferbane in Kings County and then to
Carrick on Shannon.  They went to Rosses point on holidays.  In 1857 he was sent to school in
Edinburgh and stayed with his uncle Sam Waters.  He went to work in London for Messrs Drelenvaux
& Bremmer a German shipping broker in Mark Lane aged 15.  When he was nearly 18, he moved back
to Ireland to take exams in the hope of joining the constabulary.  He married Margaret Helen McNab,
daughter of James McNab at Castle Connell on 4 Jan 1872.

He was accepted into the RIC and his first post was to Grange in Co Sligo.  He was a friend of Captain
Charles Wynn, who was son in Law to Sir Robert Gore-Booth and attended séances in Lissadell.
There is a suggestion that he ran up gambling debts and this prompted his being moved to
Ballyvaughan in Co Clare in 1870 where he met his future wife,  His next move was to Cookstown
(2 girls born here, Jane and Lucy), they were then moved to Castletown Berehaven in 1874 and 2 more
girls born (Ethel and Maud).  When Ethel was four she was sent to Samuel's Uncle Sam in London.

In 1877 Samuel contracted Typhoid fever and in August of the same year he was transferred to
Lisnaskea in Co Fermanagh. He daughter Helen was born and Edith was brought back from London.
Amie was born and they were transferred to Castlepollard in Co Westmeath.  He then make 3 transfers,
firstly Sligo, then Athlone and then to Armagh, leaving the family behind in Sligo.  At this point he has
eight daughters and one son.

A keen cricketer, fisherman and golfer, he also shot and played tennis and croquet.  He was
transferred to Kerry where he took lodgings and the rest of the family moved temporarily to Idrone Tce
in Blackrock.  He rented Chute Hall in Kerry and the family moved in together.  They spent 3 years in Kerry
and it is during this time that Samuel and his wife celebrated their silver wedding anniversary (1897),
and six of his daughters met their future husbands.

They moved to Dublin to a house in Sandymount called Towerville and Arthur was born.  He established
a special intelligence department before moving to Park Avenue in Sandymount where Dick and Olive
were born.  They had ten daughters and three sons.  There was another son born in Castlepollard but he
did not survive.  They then moved to White Hall in Blackrock where they resided from 1891 to 1891.
​Their three eldest daughters worked in Mrs Kerr's Ladies Hat Shop.

His next transfer was back to Dublin, where they took a house in Clontarf.  He received a medal for
his protection duty of Queen Victoria on her visit of 1900.  He retired on full pay after with over 40 years’
service on 23rd Oct 1906.  They moved to Adelaide Road and then to Skerries, finally settling in
Woodview Stillorgan c1909.  Helen died in 1926 aged 77 and Samuel died ten years later on .

2          Sarah Lucy Eleanor (Lucy) Walker-Waters born 30 Sep 1873 at Cookstown, Co Tyrone.  She
was living at Chutehill when she married Richard Edward Maunsell a Land Agent of
21 Ailesbury Road son of Richard E Maunsell on 5 Aug 1895 at the Parish Church of
Ballymacelligott.  Richard died at Shellmartin, Portmarnock on 12 Mar 1929

3          Mary Ethel (Ethel) Walker-Waters third daughter, born 12 Feb 1875 married Captain George John
William Noble eldest son of Sir Andrew Noble KCB late of 13th Hussars on 29 Jul 1896 at
St Peter’s, Eaton Square, London.  Mary Ethel was sent to London at 16 and was virtually
adopted by George Wyndham and his wife Countess Grosvenor who tried to have her Irish
brogue erased.  George Bernard Shaw and Mrs Patrick Campbell knew her well, it is thought
that she was one of the sources for Shaw's Eliza in Pygmalion.

8          Robert (Bertie) Abraham Walker- Waters born circa 1881 in Castlepollard, co Meath
living at Newcastle upon Tyne in 1911 and working as a mechanical engineer.