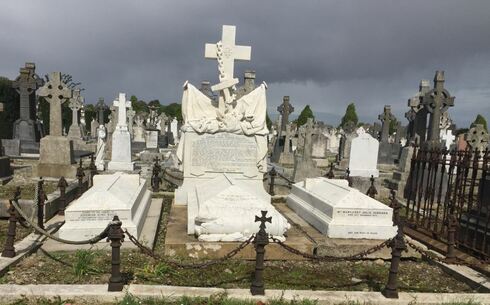 Captain James Vaughan R.N. C.B. entered the Royal Navy in 1841 on board the H.M.S. Scout,
served during operations on the River PlaTe.  Lieutenant Vaughan served in the Baltic and
Black Seas in 1854-1855.  Was on board the H.M.S. Britannia during the attach of Sebastol.
He joined the H.M.S. Shannon in 1857 going to India.  He was involved in the relief of
Lucknow, promoted to Commander, awarded the Companionship of the Bath and then
promoted to Captain.   Captain James W. Vaughan, C. 8., R.N., was appointed Aide-de Camp
to the Lord Lieutenant of Ireland, (Earl of Carlisle) in July 1862 and resigned in September
1863.  The same Earl stood as witness to his marriage.

James married Margaret Julia King daughter of Jeremiah King a Solicitor of 49 Baggot Street
formerly from Tralee, and niece of Edward Mulchinock in 1863.   Jeremiah died at Stradbrook
Hall on 06.07.1873 aged 84 years.  After the death of both her father and husband, Margaret
became seriously ill and although under watch, took her own life.

The magnificent memorial to her husband was sculpted by the Physicks family, Sculptors
and Stonemasons of London.  His medals sold at auction in 2017 for 18000 Sterling.


* probate to her Uncle Edward Mulchinock