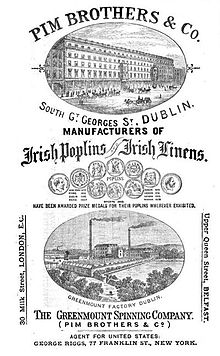 ​Pim Family of Knocksinna
​
The Pim family were the owners of a large department store in South Great Georges Street designed
by Sandham Symes and built in several stages.   It was demolished in the 1970s to make way for an
office building.  They were also the owners of the Dublin City market, built 1881, rebuilt in 1894
after a fire and now known as the George's Street Arcade and owned by Dunnes Stores.

Jonathan Pim of Greenbank, Monkstown born circa 1806 was the co-owner of the Greenmount Mills
in Harold's Cross along with his brothers Thomas Pim and Greenwood Pim.  He married Susan J
Todhunter, daughter of John Todhunter of Dublin.  An MP, he was returned for Dublin in 1865 and
in 1868.  He was a director of Pim Brothers of South Great Georges Street.  Susan died at Greenbank
20 Jan 1868.   Jonathan died at Greenbank on 6 Jul 1885 and was buried at Temple Hill Cemetery.

2            Thomas Pim, J P born 5 Oct 1831 was chairman of Messrs Pim Bros of Georges Street and
on the council of the Chamber of Commerce and the council of the RDS.  He married
Suzanna Evans, daughter of John Evans, MD of Richmond Street.  Thomas became managing
director of Pim Brothers of South Great Georges Street and died 19 Jan 1900 at Greenbank
and was buried at Temple Hill.

2         H Leopold Pim born 10 Apr 1863 at Birch Grove, Dublin was a merchant/Draper of George's
Street.  He married Helena Eveleen Beale, daughter of George Cotter Beale of Elmgrove,
St Luke's, Cork at the Friends meeting house in Monkstown 20 19 Dec 1900.  The lived at
Seapoint Villa before moving to Knocksinna in Stillorgan.  Leopold was auditor of the Great
Northern Railway Company for 50 years and became a director of the Royal Insurance
Company in place of his father in 1900.  Helena died at Knocksinna on 6 Dec 1920 and
Leopold died 13 Mar 1947 at 10 Hatch Street and was buried at Temple Hill Blackrock.

2            Richard Pike Pim born at Dunmurry 10 Jul 1900 was graduated from Trinity.
He served as a midshipman in the R N Volunteer Reserve attaining the rank of
commander in 1929 and was a district inspector of the RIC.  He was appointed
principle officer in charge of the Home Office and right hand man of Lord
Dufferin.

6          Elizabeth Eveleen Pim married Henry Theodore Bewley, MB, son of Henry Bewley of
Willow Park, Booterstown on 16 Aug 1887 at the Friends Meeting house Monkstown.
Henry was president of the Dublin University Biological Association.  He was on the
medical staff of the Adelaide Hospital and lecturer on Typhoid and its prevention.
It was elected to the consulting staff of the Rotunda Hospital in 1917.  Eveleen died
5 Aug 1930 and Henry died 8 Jan 1945 aged 84.

7          Susan Amy Pim married Frederick Littleboy from Sunderland, a corn miller and son
of Graham Thomas Littleboy on 12 Oct 1892 at the Friends Meeting House in Monkstown.

4            Mary Pim, eldest daughter born 14 Dec 1834 at Parnell Place married John Richardson Wigham at
the Friends Meeting House, Monkstown on 4 Sep 1858.  John born in Scotland to a Quaker family
was a mechanical engineer and an inventor.  His sister married John Richardson Edmundson who
had a brass foundry in Capel Street and John as a 15 year old moved to Dublin to work as an
apprentice.  In 1863 the Dublin Ballast Board funded Wigham’s research and his new gas light was
installed in the Baily Lighthouse.  He was president of Blackrock Township and chairman
of the Blackrock & Kingstown Drainage Board. They had six children.  Mary died 23 Dec 1899.
On his death he was described as a former chairman of the Chamber of Commerce and president
of the YMCA.  He died at his home on Albany Road Monkstown on 16 Nov 1906 age 77 and was
buried at Temple Hill Cemetery.  Some of his inventions can be seen at the Maritime Museum in
Dun Laoghaire.

4             Edgar Athelstan Pim born 29 Mar 1871 at Richmond Hill, Monkstown.  Edgar of Lonsdale,
Stillorgan married Arabella Evans of 12 Upper Merrion Street, daughter of John Evans at the
Friends Meeting House, Eustace Street on 7 Feb 1901.  He was a director of Messrs Pim
Brothers and Co of William Street and also a director of the Hosiery Company - Smyths of
Balbriggan.  Edgar died on 23 Aug 1938 aged 67 and is buried at Temple Hill
Cemetery.

7             Joseph Todhunter Pim born 12 Jul 1841 at Kingstown was educated at York Quaker School.  He was
chairman of Pim Bros Ltd, the linen and woollen retail and wholesale branch of the company.  He
served as a director of the Bank of Ireland eventually becoming a Governor of same.  Treasurer of
the Dublin Hospital Society Fund and chairman of the South City Markets Company.  Joseph died a
bachelor on 2 Jul 1925 at Rinnamara, Monkstown.