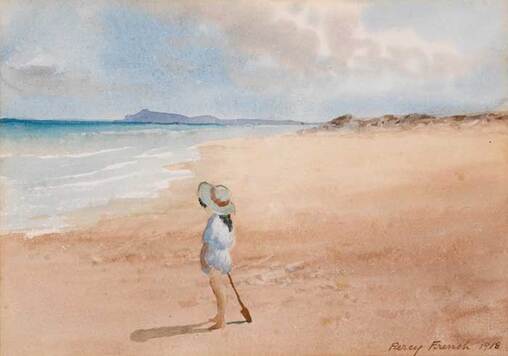 LITTLE GIRL ON A STRAND, 1918 - WILLIAM PERCY FRENCH (realised 14k at Whytes auction in 2006.
Song of William, Inspector of Drains

Let others betake them to the Western Plains
And ease the redman of his ill-gotten gains;
No tomahawk ever shall inure the brains
Of William, the local Inspector of Drains.

He mounts his tall trap, gives his charger the reins,
And gallops away through the green county lanes,
The Board pays the posting the balance remains -
With William, the Local Inspector of Drains.

He finds out the holding and what it contains,
Then maps out his system in furlong and chains
And points out positions for 'miners' and 'mains' -
Such wisdom has William, Inspector of Drains.
Johnston/Percy Family of Beverston, Mount Anville

Rev William Alexander Percy of Carrick on Shannon eldest son of Henry Percy married Elizabeth Lloyd
daughter of Robert Jones Lloyd of Smith Hill, Roscommon circa 1822. William was Rector of Carrick-on-
Shannon, Leitrim.  He was the grandfather of the famous songwriter Percy French.

Percy married secondly Helen May Cunningham Sheldon of Burmington House, near
Shipston-on-Stour eldest daughter of Jonathan Sheldon on 24.01.1894 at Burmington
Parish Church.  Percy  died on 24.01.1920 and is buried in the churchyard of St Luke’s
Parish Church, Formby.

4          Emily Lucy French born 07.08.1859 at Clooniquin House, Co Roscommon was educated
privately at home.  She moved to London, trained as a nurse at Bethnal Green Hospital
and moved to China in 1888 where she met Doctor De Burgh Daly who was a medical
officer to the HM Consulate.  She married Charles Calthrop de Burgh Daly, youngest son
of Ulick J Daly at Ningpo China circa 1890.  They moved to Newchwang in 1893 and Charles
was awarded the Order of the Double Dragon giving him the rank of Mandarin in 1896.
They returned to Dublin in June 1912 and lived at 71 Park Avenue, Sandymount.  Emily
died on 13 Nov 1835 at Priory Lodge, Stillorgan and Charles died at Raford, Knocksinna
Road Stillorgan in 1947.  He left over 20K in personal estate.

1          Ethel Muriel Percy only daughter born circa 1879 married Noel Standfast on 27.10.1903
at Cape Town.  While her husband was away in Africa, Muriel moved into Beverston with
Lucy Johnston her cousin in 1905.  After her marriage she had undergone an ear operation
in London followed by an attack of acute hysteria and had been put into a home.  At the
end of November Dr Goff of Tynton had been sent for as she had another attack and he
gave her a soothing medicine. There were blisters on her fingers but no bottle of acid
could be found to explain them and it was put down to religious mania.  He did not think
she should be put in an asylum until she attacked him and said he was the Devil.  He called
the police and two constables were dispatched to Beverston to check out a dangerous
lunatic.  She was found in a violent state in her bedroom standing in her night dress with
broken glass and furniture all around.  She ran to the fireplace where the fire was lit and
put her head in the grate and they pulled her away.  She had broken delph in her mouth
which she was trying to eat.  She was restrained and brought to St Patricks Hospital.
The medical superintendent of St Patricks stated that when she arrived at the hospital
she was in a condition of acute delirium and was violent, incoherent and dangerous to
those near her.

She had extensive burns on her hands, arms, both soles of her feet and on one breast.
There were several wounds on her legs.  Everything possible was done for her but she
died on 1 Dec 1905 at St Patricks.  An inquest was held the following day at the Hospital
on the remains of Mrs Muriel Standfast aged 26 years a lady of independent means but
no postmortem carried out.  There were injuries that could not be explained but a verdict
was arrived at, an outcome that would not be acceptable today.  The Jury found that
death was caused by acute delirious madness accelerated by superficial burns self
inflicted at her residence.