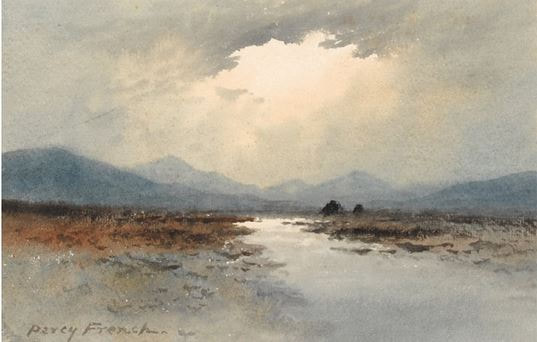 Ulick James Daly born in Loughrea, Galway, circa 1826, youngest son of Arthur Henry Daly and his
second wife Jane Gore.  He married Elizabeth Turtle, daughter of William Thompson Turtle of
Buntingford, Herts on 1 Jun 1850 at Monkstown.  His father is given as the late Ulick J Daly in the
parish register and Arthur H Daly in the newspaper notices.

Bessie died on 17 Apr 1857 at Russell Street from Puerperal fever 11 days after the birth of their
daughter Elizabeth.  Ulick of Philipsburgh Avenue Dublin secondly married Louisa Jane Bonner,
daughter of the late Charles Bonner of Spalding, Lincolnshire on 1 Dec 1858 at Clapham.

4             Charles Calthrop de Burgh Daly youngest son of Ulick J Daly baptised 22 May 1861 at
Wandsworth.  He attended TCD and married Emily Lucy French on 21 Oct 1890 at Ningpo,
China.  Emily was born 7 Aug 1859 to Christopher French JP DL of Clooneyquin, Co
Roscommon and his wife Susan Emma Percy.  Emily was the sister of William Percy (Percy)
French, songwriter and painter.  She was educated privately at home, moved to London,
trained as a nurse at Bethnal Green Hospital and moved to China in 1888 where she met
Doctor De Burgh Daly who was a medical officer to the HM Consulate.  They moved to
Newchwang in 1893.  Charles was awarded the Order of the Double Dragon giving him
the rank of Mandarin in 1896.
​
They returned to Dublin in June 1912 and lived at 71 Park Avenue, Sandymount.  Charles
joined the RAMC, was an official recruiter for the army and he recorded that he was shot
at by Countess Markievicz in 1916 whilst wearing his RAMC uniform.  In 1915 Emily
published a book called 'An Irishwoman in China.  She was member of the Irishwoman's
Reform League and gave talks to suffrage groups.  She was a member of the Mother's
Union and toured the county setting up new branches.  She catalogued her brother’s work
producing a book in 1922 and another in 1925.  They lived at Priory Lodge from 1920 until
at least 1935.
​
Charles was in charge of the Princess Patricia Hospital in Bray by 1917 and in later years
took on the role of Director of Statistics of the Hospital Trust Sweepstake and was a member
of the Joint Hospital Committee.  Emily died on 13 Nov 1935 at Priory Lodge, Stillorgan and
Charles died at Raford, Knocksinna, Stillorgan in 1947.  He left over 20K in personal estate.

1       Ulick de Burgh Daly joined the army but was invalided out after being wounded and
suffering with acute appendicitis.  He married Violet Scaly-King, younger daughter
of Charles Scaly King at Columbo in October 1921.

2        Arthur Charles de Burgh Daly born 12 Aug 1897 at Newchwang, Manchuria, China
enlisted in 1915.  He was 2nd Lieut with the 5th Battalion Royal Dublin Fusiliers.  He
was killed on 9 Sep 1916 aged 19 at the battle of the Somme and was buried at
Delville Wood Cemetery Longueval.

Ulick a clerk with the GPO and an agent for the H & K Mail was living at Clapham Villa and
went bankrupt in 1862 having purchased three plots in Stillorgan from Messrs Bentleys the
developers of Foxrock (Kelston, Mount Salem and Avonmore).  At that time, he was described as
a builder and market gardener.  He lived at Eccles Street from 1890 until his death.  Ulick James
Daly, a widower of 74 Eccles Street and son of Arthur Henry Daly married Mary Ross of 14 Lower
Dorset Street only daughter of James Ross of Londonderry on 24 Mar 1879 at St Georges.  His
son Charles was a witness.  Ulick died at Eccles Street on 8 Sep 1906 and was buried at Mount
Jerome.