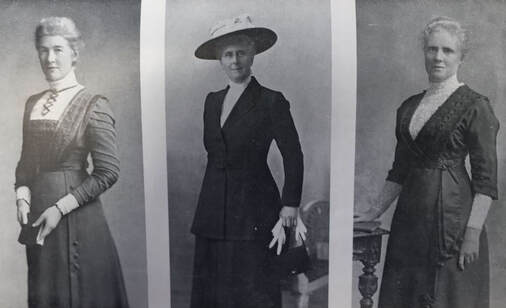 Lucy Garratt died in 1859 and Joseph a widower then married Harriette Chaytor daughter of late
Joshua Mason Chaytor of Heathville, Monkstown in 1861.  Joseph was a Quaker and Harriette his
wife had found God through Evangelism and Joseph joined this movement.  The children were
brought up in a very religious household and devoted a lot of time to reading the bible.  Joseph
bought two houses on Sydney Avenue in 1876 to be used as a Mission Hall, this was in use until
1953 and known as Sydney Hall.  The group then moved to Mount Merrion and in 1981 the name
was changed to South Hill Evangelical Church.  Joseph's grandson Cyril attended this church
until his death in 1966.  Joseph died in 1885 leaving personal estate of 64K.  Glenvar he left to his
wife and Purbeck Lodge in Monkstown was left to his son William.  Harriette died 29 Dec 1900 at
Glenvar and left 9K in personal estate.  Both are buried at Temple Hill Quaker Cemetery.

5               Helena Garratt* born 04.06.1869 at Glenvar was a devote Christian, as were her sisters.
Their missionary work started from a small hall nicknamed the 'Tin Tabernacle' which
was to the rear of Sydney Hall.  They set up mothers meetings and a laundry to give
Roman Catholic women employment.  They arranged open air meetings, these originally
took place outside the gate of their house but gaining confidence they moved to the
gate of Blackrock Park.  For two years they were met by howling mobs using foghorns
and beating tin cans who were opposed to them.  Glenvar became a convention
centre with Pilgrims from all over the world visiting.  The three sisters toured the
country speaking at various missions and selling the Faith Missions newspaper 'Bright
Words'.  In 1916 the three sisters left Ireland for South Africa to work with the Faith
Mission.  Helena died on 29.03.1952 at Errigal, Hout Bay and was buried at Dido
Valley Cemetery beside her two sisters.

*               The life and works of the three sisters are related in a book 'A Life with a Message' by
I R Govan Stewart published by The African Evangelistic Band Bookroom.  It details their
lives, growing up in Glenvar, joining the Faith Mission, setting up a laundry in Blackrock
and their missionary work both in Ireland and South Africa.  Thank you to Mrs Eleanor
Pomagalski for this information.