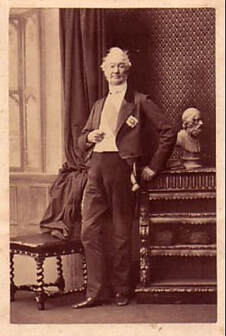 Thomas Burgh, son of Thomas Burgh, architect and Anne Downes of Bert House Kildare.  Thomas  was
the grandson of Ulysses Burgh, Archbishop of Armagh.  He married Anne Agoin, daughter of David Agoin,
a leather merchant of Jervis Street on 20 Mar 1775 at St Mary’s, Dublin.  Thomas was an MP, comptroller-
general and commissioner of HM revenue of Ireland and had a house at Sackville Street.  Thomas died
on 14 Jun 1810 at Bert House and was buried at Kilberry graveyard.  Anne died aged 82 at Chesterfield,
Booterstown, the residence of her son in law Nathaniel Sneyd on 14 Jul 1831.

4               Ulysses Burgh youngest son born 15 Aug 1788. He entered the Army, and was gazetted ensign
in the 54th Regiment of Foot on 31 Mar 1804, and was promoted lieutenant on 12 Nov 1804,
and captain on 4 September 1806.  He was ADC to Sir Arthur Wellesley and the bearer of his
​                 dispatches.  He returned to Ireland in 1810 with news of the victory at the battle of Busaco.  He
married Maria Bagenal 20 Jun 1815.  Maria was the only daughter and heiress of William Bagenal
of Bagenelstown.  By the end of the Pennisular wars in 1818, he had been wounded a number
of times and awarded the KCB and the KTS.  The same year he was returned MP for Carlow which
he held until 1826.  In 1822 he was appointed Surveyor- General of HM Ordnance of the United
Kingdom of Great Britain.  Maria died 20 Aug 1842 at Bert House and was buried at Kilberry
graveyard.  Ulysses took a house in Perry Square Limerick the following year but continued the
practice of the annual Harvest Home feast at Bert House for tenants, workers and wives sometimes
catering for up to 400 guests.

2            Charlotte Burgh, second daughter born 1826 married Major James Colborne, eldest son of Lord
Seaton on 12Feb 1851 at St Peter’s, Eaton Square.  James became 2nd Baron Seaton on the
death of his father at Torquay in 1863.  The couple had eight children.  Lady Seaton died at
Valleta House,  Torquay on 26 Apr 1863 some days after being delivered of twins.

Ulysses de Burgh secondly married Cristophena Fleming on 4 Aug 1846.  She was the daughter of
James Buchanan and widow of John Willis Fleming of Stoneham.  That same year he presented the
Town Hall Clock to Athy.   He renovated Bert House adding wings to give it a Palladian feel.  In 1848 he
assumed by Royal licence the surname of de Burgh in lieu of Burgh.  Christophena died 18 Oct 1860 and
Ulysses 2nd Baron Downes died 26 Jul 1863 at Bert House, Kildare.  He left 9K in personal estate and
John Seaton and Countess Clonmel were his executors.  The barony became extinct on his death.