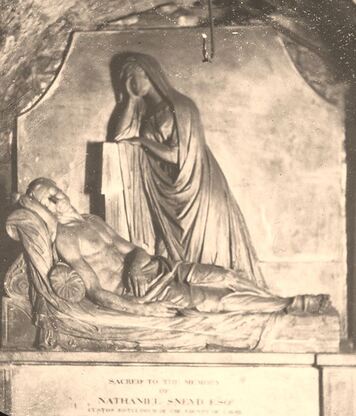 Edward Sneyd married Hannah King daughter of James King of Gola circa February 1764.  Edward was a
wine merchant of Cavan, Bachelor’s Walk and later Sackville Street.  He was also MP for Carrick and was
the brother of Ralph Seyd of Dublin City and The Rev Thomas Sneyd of Beliburrow, Co Cavan.  Hannah
was the niece of The Bishop of Elphin (William Gore).  Hannah died at Sackville Street in November
1775 and Edward died circa March 1781 at Nice, France.

2                Nathaniel Henry Sneyd born circa 1767 baptised at St Marys Dublin on the 1 Nov 1767.
Nathaniel Sneyd attended Rev Craig’s school and acted at as steward at later school reunions.
He married Alicia Montgomery on 29 Jan 1791 ML.  Alicia was the daughter of George
Montgomery, MP of Ballyconnel, Co Cavan.  Alicia died in 1793 in Oporto, Portugal.  Nathaniel
was a wine merchant in partnership with the Hon Hans Blackwood, The Hon Price Blackwood
and Hugh Barton trading as Sneyd and Blackwoods.  In 1806 that partnership was dissolved
and a new partnership with Hugh Barton, Arthur French was set up and they traded as Sneyd,
French and Barton from Sackville Street.  He secondly married Anne Burgh in August 1806.
Anne was the daughter Of Thomas Burgh, MP of Bert House, Kilberry in Kildare, Commissioner
of HM Revenue, and the sister to Ulysses de Burgh.  Nathaniel was MP for Carrick and later
Cavan and had an estate at Bawnboy, Co Cavan.  He was custos rotulorum for Cavan, a
commissioner of the wide Streets, a member of the Ouzel Galley and commissioner of the Ballast
office, Dublin.  He was a director of the Bank of Ireland in 1802, Deputy Governor from 1816 to
1818 and Governor from 1818 to 1820.  They lived at Chesterfield from circa 1822 to 1833.

On 29 July 1833 as he was strolling down Westmoreland Street, Nathaniel was shot in the head
twice with a 4 barrelled pistol followed by a blow from the butt end of the pistol by John Mason.
Mason had a grudge against the firm of wine merchants Sneyd, French and Barton, where Sneyd
was senior partner.  Nathaniel died of his wounds two days later and the sculptor Thomas Kirk
was called in to made a death mask.  He was buried at Lord Downes’s (his brother in law, General
Ulysses de Burgh, 2nd Baron Downes) family vault in St Mary’s on 3 Aug 1833.

John Mason was the son of Abraham Mason, a wealthy Iron Monger and Catherine Waugh of
Dawson Street, and the brother of Rev Thomas Mason of St Catherine’s.  He was found to be
delusional and a lunatic.  He was sent to the Richmond Lunatic Asylum to be imprisoned for life.

The memorial to Nathaniel is a life-size effigy installed in the crypt of Christ Church Cathedral,
Dublin in 1836.  The sculptor Thomas Kirk represented Nathaniel lying dead with a female figure
weeping over him.  The inscription reads:

‘Inscrutable are the dispensations of Providence. This man so blameless in all the relations of his being so
respected and so beloved perished by the hand of violence but it was the indiscriminating violence of an
unhappy maniac while the universal sentiment of profound and poignant sorrow excited by the afflicting
event amongst all classes of his fellow citizens supplied the truest and the most expressive tribute to those
virtues of which it is the purpose of this memorial to preserve the record and to perpetuate the remembrance.’