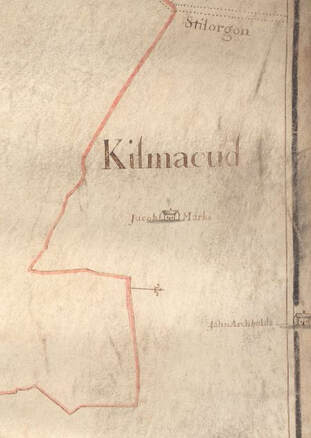 KILMACUD  -  A history of the County Dublin; the people, parishes and antiquities from the earliest times to the close of
the eighteenth century by Francis Elrington Ball.

'The lands of Kilmacud, or the Church of Macud, were granted after the English Conquest, together with the lands which lay
between Stillorgan and Dublin, to Walter de Rideleford, Lord of Bray, and became part of the manor of Thorncastle, now
represented by Booterstown.  As portion of that manor they were, in the fourteenth century, in the possession of Sir John
Cruise, and subsequently passed to the Fitzwilliams of Merrion, from whom the Earl of Pembroke is descended in the
female line.  During the fifteenth century the lands, on which there were two stone houses, were held under the
Fitzwilliams by the tenants of Shanganagh, and their trustees, Thomas Sale, of Salestown, and William Walter, a
clergyman ; and in the sixteenth and seventeenth century by the Archbolds

The Archbolds of Kilmacud, who held the lands for more than 200 years, were descended from some of the first English
settlers in the County Dublin, and belonged to a widespreading clan. The earlier members of the family were evidently,
from the funeral pomp with which they were laid to rest in the quiet churchyard of Dundrum, people of good position
amongst the Roman Catholic families of the Pale, and the later members were recognised amongst the landed gentry
in the County Dublin, and in the County Kildare, where a branch of the family settled. Amongst the residents at Kilmacud
we find, in 1584, Richard Archbold, whose daughter married James Wolverston, of Stillorgan, and whose son Piers was
granted a pardon by the Crown; in 1615, Patrick and Edmund Archbold; and in 1641, Maurice, son of Patrick Archbold.
After the Restoration Kilmacud, which had been assigned by the Parliament to one of the regicides,  John Hewson, who was
governor of Dublin, was claimed under the Act of  Settlement in equal shares by Gerrard Archbold, of Eadestown. in the
County Kildare, " an innocent Roman Catholic, " and Richard Archbold, of Mapas, in Cheshire, " an innocent Protestant."
The former claimed as representative of Edmund Archbold,' the joint owner in 1615, whose son William Archbold, of
Cloghran, had sold his interest to Archbold's father, and the latter as representative of Maurice Archbold, who was his
grandfather.  Richard Archbold was restored to his moiety of the lands; but the other moiety was confiscated and was
granted by Charles II to his brother, the Duke of York, afterwards James II.

There were then four houses on the lands, and a population of thirteen persons, eleven of whom were of English
extraction, and two of Irish.  The Archbolds, who rented the moiety granted to the Duke of York, in addition to the moiety
which they owned, continued to reside at Kilmacud.  In 1681 Christopher Archbold was resident there, and in 1703, when
James the Second's moiety was sold, at Chichester House, to the Hollow Sword Blade Company, which purchased a
considerable quantity of his property, Mortagh Griffin, as guardian to his stepson, James Archbold, was returned as the
tenant.  After the death of the last of the Archbolds, who resided at Kilmacud, John Archbold, who died in 1756, their
interest passed through mortgages which they had executed upon the property, into the possession of Lieutenant-
Colonel John Arabin, the father-in-law of General Aylercorn of Seapoint.'

In was announced that on 4 Oct 1756, that the stock and effects of John Archbold (deceased) would be sold by Public Cant.
Corn Hay and Cattle were all to be sold along with his household furniture which included beds, paintings, dining tables
and chairs beds, even wearing apparel was for sale.  John's son Richard died at Milltown ​in May 1783.