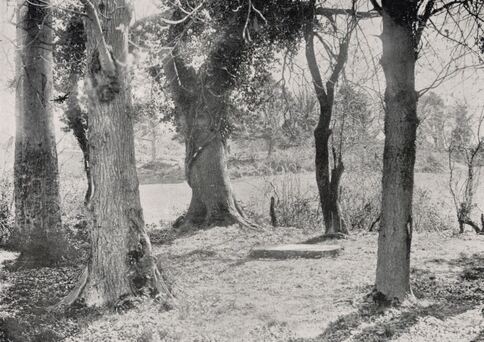 Grave of Getrude Curran in the grounds of Priory, from the Footprints of Emmet by JJ Reynolds (1903).
Curran Family of Friarsland, Roebuck

Rt Hon John Philpot Curran born in Newmarket, Cork the eldest son of James Curran and Sarah Philpot.
John a Politician, Lawyer and Master of the Rolls married Sarah Creagh daughter of Dr Richard Creagh
and sister of Mrs Odell in 1774.  John a personal friend of Henry Grattan was a champion of Irish
Liberties and defended Rebel Leaders.  He fought a number of duels including one with John 'Bully'
Egan, a fellow Corkman.  He separated from his wife in 1795 after taking an action against Rev Abraham
Sandys for criminal conversation.  He received only £50 in damages, a paltry sum after his wife gave
evidence of his libertine behaviour.

1                Amelia Maria Curran eldest child born circa 1775.  Amelia painted a portrait of Shelley in 1818
in Rome.  In 1821 she went to Naples where she became a Roman Catholic, she returned to
Rome, where she lived until she died on 30.08.1847 in Rome and the funeral was held in the
Church of St Isidore.  Lord Cloncurry commissioned a memorial to Amelia at that Church. Her
remains were interred in the vaults of the Convent.

2                Richard Creagh Curran born 1776 Cork. Richard was secretary to Valentine Lawless and a close
close friend of Robert Emmet.  He was greatly affected by his execution.  He became involved
in a relationship with Mrs Henry Erskine Johnston, an actress and left Ireland after her husband
attempted to sue him in 1807.  He married Jacobina Maria Wigsell of York Place daughter of Sir
Robert Henderson and Widow of Rev Thomas Wigsell in 1810.  Richard died on 11.12.1846 at
his residence Argyll House, Kings Road, Chelsea.

7                Sarah Curran 6th and youngest daughter born circa 1781 was betrothed to Robert Emmet who
was executed for treason in 1803. Sarah moved to Cork where she met and married Captain
Henry Sturgeon of the Royal Marines nephew of late Marquis of Rockingham in December 1805
at Glanmire Church.  Sarah died on 05.05.1808 aged 26 years at Hythe, Kent.  She wished to be
buried beside her sister Gertrude but her father refused and she was buried at Newmarket, Cork.

10               William Stowell Henry Curran youngest son of Ely Place on 20.03.1789.  He was called to the Irish
bar in 1816 and appointed assistant barrister for County Galway.  A founder member of the
Stephen's Green Club, he wrote a biography of his father John Philpot Curran.  William was the
Commissioner of the Insolvent Debtors Court and lived at Friarsland, Roebuck.  William died
a bachelor on 24.08.1858 aged 69 years at 9 Fitzwilliam Place and was buried at Mount Jerome.
He left 17K in personal estate and Henry Grattan Curran was one of his executors.

After his separation from his wife, he became involved with Marianne Fitzgerald, widow of John Fitzgerald
of Tipperary and he had three more children.  He died in 1817 and his remains were interred in the vaults
of Paddington Church.  He left the majority of his estate to Philpot Fitzgerald called his nephew in his Will.
His remains were transferred from Paddington and arrived in Dublin on 25.07.1835 where they were
deposited in the mausoleum of Lord Cloncurry at Lyons.  From there circa 10.02.1837 to St Patricks section
of Glasnevin.

13                Henry Grattan Fitzgerald, later assumed the name Curran, born 05.02.1800 in Tipperary received
money in his fathers will.  Henry a Barrister married Catherine Adrien of Dawson Street 2nd
daughter of John Adrien, Surgeon circa 26.07.1821.  Catherine died on 04.10.1874 at her
residence Osmantown Mall, Palmerstown and Henry died on 10.02.1876 aged 76 years also at
Parsonstown. They are buried at Mount Jerome with his half-brother William and son Charles.