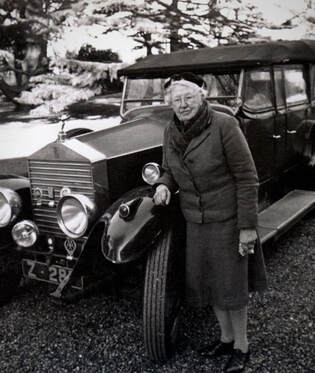 5         Trevor Thomas Letham Overend born 01.01.1847 in Portadown 3rd son of John Overend of
57 Rutland Square married Elizabeth Anne (Lily) Butler 2nd daughter of William Paul Butler
and Letitia Gray of Broomville, Co Carlow on 18.09.1879 at St Mary’s Church, Donnybrook.
William Paul Butler eldest son of Captain Butler of Broomville, Carlow married Letitia Maria
Gray 2nd daughter of John Gray of Upton House, Leighlinbridge on 28.10.1846 at Fenagh
Church.  Thomas was a busy and successful solicitor with offices at 12 Ely Place.  He was
also solicitor to the National Assurance Company of Ireland.  As a couple they would run
the vegtable and flower stall at the Christmas fete in aid of the Adelaide Children's Hospital.
Lily was a founder member of The Children’s League of Pity in Dundrum (a specialised
branch of the RSPCC.  She also reared Jersey cattle (Drummartin breed), the herd were
regular prize winners at horticultural shows including the RDS and her daughters continued
the breeding and showing the herd after her death.  Trevor died on 08.04.1919 and Lily
died on 21.01.1945, both are buried at Deansgrange.  Their daughters were left well
provided for with no necessity to work and instead devoted themselves to volunteer
work.  The would also regularly open the gardens for fetes in aid of charities like the Jubilee
Nurses Pension Fund.

1          Letitia Lily Ann Letham Overend born 14.07.1880 at 11 Herbert Road.  Letitia worked
as a St John Ambulance Brigade volunteer at the central depot during WW1, she
continued as a volunteer and was awarded their highest honour becoming Dame Justice
of the Order in 1955.  She was a member of the County air association, which provided
a change of air to poor protestant children.   In 1923  she  provided the seed capital to
open a children's home at Stillorgan, this non secterian home was to specialise in
treating children with rickets.  The wooden home opened in 1925 and childen were fed
a diet high in vitamin D and encourged to stay in the light, on dark days an ultra violet
light was deployed.  This became the Children's Sunshine home on Brewery Road.  By
1949 the home was treating 36 children with rickets and TB but needed to be rebuilt.
Letitia, who was then chairman and treasurer of the home set about raising the 65k
necessary to build a new home opposite the old building which could embrace new
treatments such as physiotherapy and play therapy.  Miss Noel Bluett of Taney house
was physiotherapist to the home until her death in 1952.  By 1954 the new Sunshine
Home had been built and although it still had an overdraft, the building debt had been
cleared.  In 1960 she travelled to Jerusalem for the opening of St John's Ophthalmic
Hospital on the same same site on which the order fist began its history 900 years
previously.  She also provided the Brigade with an assembly room, lecture theatre and
canteen to the rear of their headquarters at 29 Lower Leeson Street.

Letitia was the owner of a blue 1927 Rolls Royce 20 HP Tourer which she mainained
herself and drove right up until her death.  She was a guest of the British Medical
Association's Congress in Melbourne in 1935.  She travelled to New York and then by
train to San Francisco where she then took a boat to Honalulu, Fiji and then on again
by sea to New Zealand and Melbourne.  On her return she delivered lectures with cine
film footage of her travels in aid of charities such as the National Council for the blind.
In 1961 she was awarded an honorary doctorate from Trinity.  She died 03.10.1977
and was buried with her parents.

3          Naomi Letham Overend born 19.08.1900 at Airfield.  She was president of the
Dundrum and Ballinteer District Nursing Association, an association that
educated people in the prevention of TB and promoted public health.   She
attended a course at the Rolls Royce School of Instruction in London with her sister
in order that they would be able to be self suficient in maintaining their car.  The sisters
were members of the Automobile Club in Dawson Street and also members of various
vintage clubs and regularly attended rallies using the Austin Tickford which Naoime had
received as as a gift.  She was one of the major contributors to the Don Marmion House
which opened in Dundrum village in 1992.  She was an accomplished skier and went to
Austria each year up until her 60s.  She died 24.10.1993 at Airfield and was buried with
her parents and sister.  Her funeral service was held at Taney Church.

Both sisters had a selfless concern for the well-being of others beit from altrusism, or a
sense of duty ​instilled by their mother.