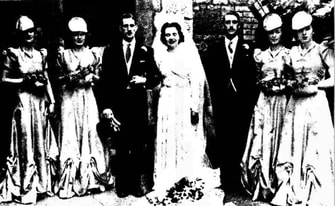 Michael William O Reilly born 11 Dec 1889 at Thornhill son of John O’Reilly of Stillorgan, a chauffeur and
his wife Mary Lyons.  He married Catherine Mary Cooney on 25 Jan 1911 at St John the Baptist Church,
Blackrock.  Michael was living at Mary Ville Convent Road, Dalkey and was an agent for the Prudential Life
Assurance Company.  Catherinewas living at 6 Carysfort Avenue and was the daughter of Edward Cooney,
a coal merchant and his wife Abigail Cullen and they lived at Maryville Terrace, Dalkey, Dublin after their
marriage.  Michael joined the IRB in 1911 and the Irish Volunteers in 1913.  He did not take part in the
Civil War and by 1930 he was managing director of New Ireland Life Assurance. They lived at Moorfield
from 1924 to 1942.  He was elected a member of the Kildare Archaeological society in 1940.  Catherine
died on 5 Jul 1957 at 59 Ailesbury Road.  Her funeral was held at the Sacred Heart Church, Donnybrook
and she was interred at the vaults at St Andrew’s Westland Row.