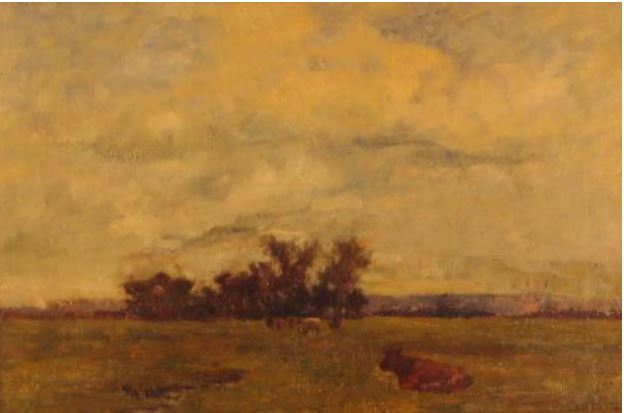 View of the sea from Kerrymount, Foxrock by J B S MacIlwaine 1893
MacIlwaine of Stanford House

John, son of Robert McIlwaine was born circa 1804.  He married Jane and they lived at Spire View
Rathgar where Jane died on 26 Nov 1852.

A widower John married Rachel Porter at Rathfarnham church on 1 June 1854. The officiant was the
Rev William MacIlwaine of St George’s, Belfast.  Rachel born circa 1824 in Dublin was the eldest
daughter of Joshua Robert Porter, a printer, bookseller and publisher of 72 Grafton Street and his
first wife Marianne Jesson of Garville, Rathgar.  Her father later lived at Mount Venus House.  John
was living at Rathgar and worked for the Bank of Ireland.  In 1860 they purchased Stanford House
for £800.  Rachel and her step daughter travelled frequently to England and there were frequent
visits to Stanford House by Rachel’s brother Surgeon Major Joshua Henry Porter and his wife
Mary Rind.  The Rev William Robert MacIlwaine, RN also visited.  John died 8 Apr 1884 at Stanford
House and was buried at Stillorgan graveyard.  Rachel died 28 Mar 1907 and was buried with her
husband.

3           John Bedell Stanford MacIlwaine born 21 Apr 1857 in Co Dublin. He was educated at High
School and studied Architecture under Sir Thomas Drew. He was an architect, artist, civil
engineer and inventor.  A member of the RHA, he exhibited regularly up until at least 1929
when he had three paintings of nature on display.   He had numerous interests and hobbies
included ancient English coins, growing vegetables (cabbage, Jerusalem artichokes and
parsley) on the land at Stanford house and breeding red setter dogs.  He took out
numerous patents and was interested in submarine devices. He was an engineer for the
Conan submarine fuse.  He visited his cousin Mary Fennell in New York in 1907.  John sold
Stanford House in 1918 and moved to Aunaghure House, Caledon, Co Tyrone.  His
housekeeper Rose moved with him and he employed John Rush as a gardener/handyman.
In later years he published many books including ‘Poultry keeping for Women’.  He died a
bachelor on 14 Jan 1945.  He left his estate after a few bequests to his servants; 80% to Rose
Cunningham and 20% to John Rush.

4           Marian Celilia MacIlwaine died an infant in 1863 and was buried at Stillorgan graveyard.