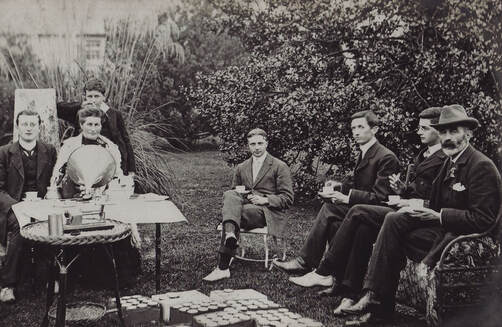 2          Edward Lee* born circa 1853 at Tyrrellspass married Annie Skeckelton of 1 Belgrave Square
daughter of George Shekelton, a farmer and his wife Mary Anne Carry from Dungar County Offaly
on 25 Jul 1878 at the Methodist Church in Monkstown.  Edward worked as a draper at Penrose
Bowles and Co in Kingstown and opened his first shop at Bray in 1885 and over the next few years
he opened shops at Kingstown, Dublin, and Rathmines. The chain became a private limited
company in 1904 and he was appointed a JP by Viscount Powerscourt.  He had a high sense of
justice and was the originator of the weekly half day holiday in the drapery business in 1889 and
also introduced a profit sharing system in his business.  He was a governor of Donnybrook Hospital
and a member of the Dublin Chamber of Commerce.  The Lee family lived at The Grange from 1903
and in 1912 they moved to Bellevue in Booterstown.  Edward died at Bellevue on 14 Feb 1927 and
Annie died 6 Mar 1938 at Temple Gardens, Rathmines.  Both were buried at Deansgrange.
​
1            Edward Shekleton (Ted) Lee born at 2 Goldsmith Tce., Bray on 11 Apr 1879.  He attended
Wesley College and graduated Trinity.  He was an accountant and married married Orynthia
May Collings, daughter of William and Henrietta Collings from Cardiff at Wandsworth in 1921.

3            Robert Ernest born Lee 15 Jan 1883 at Goldsmith Tce attended Wesley College and graduated
Trinity.  Robert Ernest was a Lieutenant in the Royal Army Medical Corps, attached to the 14th
Field Ambulance and was promoted to Captain 1915 after the second battle of Ypres.  Robert
was returning to France on board the RMS Leinster when it was torpedoed and sunk on
10 Oct 1918 and he was drowned.  His body was recovered near Gorey and he was buried at
Deansgrange.
​
4            Hastings Lee born 13 Nov 1884 died 21 Dec 1884 at Goldsmith Tce.

8            Alfred Tennyson Lee born 6 Oct 1892 at Goldsmith Tce was educated at Epworth College,
Rhyl and graduated Trinity.  He joined the 6th Service Battalion Royal Munster Fusiliers as 2nd
Lieutenant.  Alfred Tennyson was wounded on the 9 Aug 1915.  He was living at Bellevue
Blackrock when he married Marice Winifred Butler Cranwill, daughter of Thomas Butler
Cranwill of Montpelier Parade at Monkstown Parish Church on 23 Feb 1922.

5           Mary (Molly) Lee born circa 1863 was living at 1 Clifton Terrace, Ranelagh when she married
William John Gilbert, on 23 Feb 1886 at Christ Church, Leeson Park.  William was an accountant of
South Main Street, Bandon and died circa 1889 before the birth of their third child.  Mary was living
with her three children and her sister Harriet in Tyrrellspass in 1901.

5          Rachel Lee Married George Ryland, son of Jonathan Ryland, a farmer of Halugh on 20 Jan 1853 at the
parish church of Newtown Fartullagh.

6          Jane Lee married William Blackbourne, son of James Blackbourne, a manufacturer of Moate on
24 Apr 1855 at the parish church of Newtown.

*Edward Lee was the great grandfather of Michael Lee who has written a book on Edward Lee and his inspiring
story.  Lees ceased trading in the 1970's and there is now a branch of Dunne's Stores in their old shop in Dun
Laoghaire.