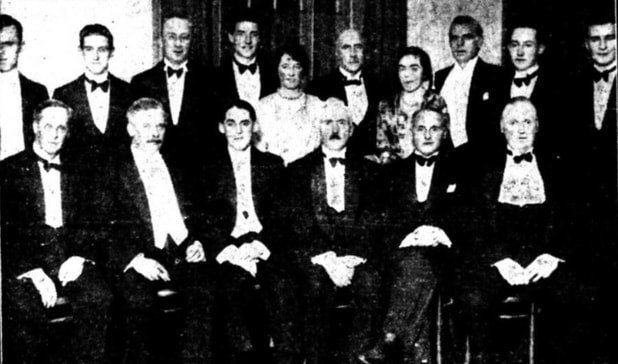 
Martin Nolan born circa 1860 in Roscommon, son of Martin Nolan, farmer.  He was a RIC constable
and married Bridget Owens on 6 Sep 1886 at Sessiagh, Enniskillen.  Bridget was the daughter of
James Nolan, farmer.  The couple had six children of whom 5 survived in 1911.  Martin, a retired
RIC officer was living in Co Roscommon with his wife and three of their children in 1911.  He was
an insurance agent and factory manager.  They moved back to Woodview Terrace, Omagh circa
1916.  Martin died in June 1932 and was buried at Omagh.

1             John James Nolan born 28 Dec 1888 at Omagh.  John was educated at CBS Omagh, St
Macartan's College, Monaghan, and later won a scholarship to the National University of
Ireland (UCD) in 1906.  He graduated in 1910 and lectured thereafter. He married Teresa
Hurley on 28 Dec 1914 at St Joseph’s Berkley Road.  Teresa was the daughter of Jeremiah
Hurley, a farmer of Bantry and his wife Margaret Breen.   Teresa attended the Dominican
Convent in Eccles Street and was a graduate of UCD.   In 1920 J J was appointed professor
of experimental physics at UCD.  One of his students was James Drumm, the inventor of the
battery for the Drumm battery train.  The family lived at Ros na Greine from 1933 to 1942
and had five children.  He had an interesting experience in 1933, when he was marooned
in the snow at the College Meteorological Station at Glencree.  His rescuers included
President de Valera.  He became registrar of the College in 1940 and was elected a member
of the Senate.  He was a member of the Royal Irish Academy and its president from 1949.
In 1950 J J was appointed chair of the School of Cosmic Physics in the Dublin Institute for
Advanced Studies.  One of his most important research investigations was the equilibrium
of Ions.  He died on 18 Apr 1952 at his residence ’Lugnaquilla’ on Cowper Road, Rathmines
survived by his wife and three sons.  He was buried at Glasnevin.
1         Eoin Nolan born 13 Jan 1916 at 2 Clare Road, Upper Drumcondra married Catherine
Rosaleen O’Reilly at Holy Cross Church on 31 Jan 1942.  Rosaleen was a designer and
the daughter of William O’Reilly of Moorfield in Roebuck.

3        Colm Nolan born 20 Jan 1919 at 2 Clare Road, Upper Drumcondra attended Blackrock
and later Belvedere College.  He studied medicine in UCD and played Rugby.   After he
qualified as a doctor he joined the Royal Navy as a Surgeon-Lieutenant.  He was a
passenger onboard a military plane which crashed on take-off from Sydney Aerodrome
into a bridge on 19 July 1945.  There were no survivors.

2           Peter Aloysius Nolan born 27 Jun 1890 at Railway Terrace, Omagh was a law clerk with Messrs
Shield & Murnaghan’s solicitors before joining the RIC and was based in Belfast.  On the
outbreak of WW1, he enlisted with the Irish Guards.  He was awarded the Military Medal for
exceptional gallantry in 1916 and the bar for bravery in the field in 1917.  Sergeant Peter A
Nolan, Irish Guards, was reported missing on 27 Nov 1917 but it was later reported that he was
killed in action in France.  He was awarded DCM in 1918.

2           Annie Catherine Nolan born 7 Jun 1892at Railway Terrace, Omagh in County Tyrone living with
her parents in Roscommon in 1911 and was a student at the National University.

3           Patrick Joseph Nolan (Paddy) born 11 Aug 1894 at Railway Terrace, Omagh in County Tyrone,
graduated UCD in 1914.  He was a physics lecturer who collaborated on many research
projects with his brother John.  He was appointed professor of physics in Maynooth College in
1921.  He married Una Hurley of Bantry on 18 Apr 1922.  Una was the daughter of Jeremiah
Hurley and a sister of his brother’s wife.  In 1972 he was awarded the Boyle Medal by the RDS.
In later years they lived in Dalkey.

4           Martin Leo Nolan born 12 Jun 1897 at Railway Terrace, Omagh in Co Tyrone.  He was a
commandant in the Free State National Army.  He married Mary Florence Carroll of Ballymanus
House and Market Street, Co Wicklow on 4 Nov 1925 at St Patrick’s Church Wicklow.  Florence
was the daughter of Michael Carroll.  They were the parents of Evin Nolan, cartoonist and artist.
Martin died on 17 Mar 1937 aged 39 as his home on Whitehall Road, Kimmage.