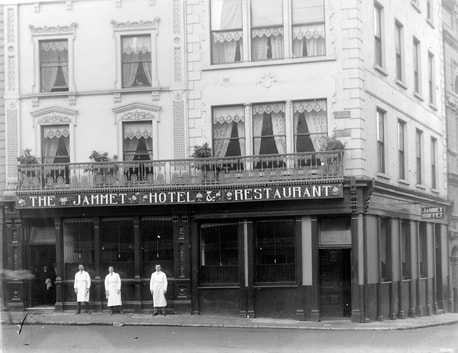 They lived at St Julia de Bec, near Quillan, Languedoc-Roussillon in the French Pyrenees.

1          Jean François Jammet born circa 1853 France was head chef at Café de Deuz Monde before
he managed Boeuf a la Mode in Paris.

François secondly married Eugenie Loisel, daughter of the owner of Boeuf a la Mode.  In 1900
he moved to Dublin to help his brother set up the Jammet restaurant and his daughter
Catherine took over the running of his restaurant in Paris.  He returned to France in 1908 and
retired.   François died 31 Jan 1940 and Eugenie died in 1949.
​
2               Hippolyte Jammet born March 1893 in France worked in Dublin and returned to France
to undertake military training in 1913.  He married Yvonne Louise Marguerite Mollard
and opened the Le Bristol Hotel in Saint Honore, Paris (this became the US embassy
during WW2).  They had 10 children.  Hippolyte died 25 May 1964 in Paris and his wife
Yvonne and son took over the running of the hotel which closed in 1978.

2          Michel Jammet born circa 1858 France.  He started work as a kitchen boy and became a chef in Paris.
He was supposed to have been invited over by Henry Roe to work at Mount Anville in 1887 but as
Henry Roe at this time was living in England and Mount Anville was the home of Christopher Pallas,
this date is in doubt.  Circa 1893 Michael got a job as chef to George Henry Cardigan, 5th Earl
Cadogan for whom he worked for nine years prior to opening his own restaurant.  He married
Josephine Biro of Suffolk circa 1887.  The Earl Cadogan lived at Culford Park in Suffolk and became
Lord Lieutenant of Ireland in 1895 taking Michel with him who then became head chef at the Viceregal
Lodge.  In 1900 Lord Cadogan retired and Michel and his brother François purchased the Burlington
Restaurant Oyster Saloons at 27 St Andrew Street, Dublin from​ Tom Corless for £12000 approximately.
They opened on 6 Mar 1901 and the family lived on the upper floors.  The restaurant was a great
success and was advertised as the ‘only French Restaurant in Dublin’.  It was considered one of the best
restaurants serving French haute cuisine in the world and was the ‘In’ place to eat and be seen.  It was
patronised by the rich and famous including William Orpen who regularly sketched  patrons of
Jammets including Pavlova.  Josephine died 29 Feb 1924 in Paris.

In 1925 the Hibernia Bank did not renew their lease and new premises needed to be found.  Large
enough premises weren't forthcoming so the purchased Kidd’s Restaurant at 45-46 Nassau Street
and two adjoining buildings which architect Frederick Herbert Jermyn was employed to renovate and
redesign.  The main entrance was on Nassau Street but they also had an entrance on Grafton Street
through Adam’s Court.  Some of the fittings from their original premises were retained including four
famous murals (since lost) depicting the Four Seasons painted by Bossini.  Michel ran his business until
1927 when he then handed over control to his son Louis.  Michel retired to Paris where he died on
24 Jun 1931.

1          Catherine (Kitty) Jammet born circa 1890 at Fulham was educated at St Mary’s Dominican Convent
in Kingstown.  She married Raymond Ormieres, a corn factor for Qillan in France at the St
Audeon’s RC Church on 27 Jul 1910.  Raymond was the son of Frederick Ormiers, a corn factor.

2          Rene Emile Louis (Louis) Jammet born 1893 in Thingoe, Suffolk in England.  He moved with his
parents to Ireland in 1895 and was educated at Belvedere College.  He joined the French army and
served in WW1. He was invalided out in 1916, having been seriously wounded in the arm.  He
married Yvonne Aunger, daughter of Félix and Catherine Aunger circa 1922.  She was a landscape
painter and sculptor. They had two children born in France (Michel and Raymonde) and moved to
Dublin where two further children were born.  The restaurant went from strength to strength
under Louis’ management, the visitors book contains many famous names including Bing Crosby,
Maureen O’Hara, Judy Garland, Elizabeth Taylor, and even a little note from John Lennon in 1964.
Louis and Yvonne lived Queens Park, Monkstown, but moved to the sixteenth century ‘Kill Abbey’,
in 1946.  Louis died 17 Oct 1964 at Kill Abbey.

Traffic and a lack of parking became an issue for the business.  In 1967, Patrick, the only child
involved in the business, closed the restaurant and sold the business with the intention of opening
Jammet’s Hotel and Restaurant’ on Shelbourne Road, Ballsbridge. but failed to obtain the necessary
planning permissions.  The Nassau Street premises subsequently were home to the Berni Inn, Judge
Roy Beans, Porterhouse and Lily’s Bordello.  Yvonne died whilst visiting the United States in
​                       Massachusetts on 30 Aug 1967.  She was buried at Deans Grange Cemetery with her husband.