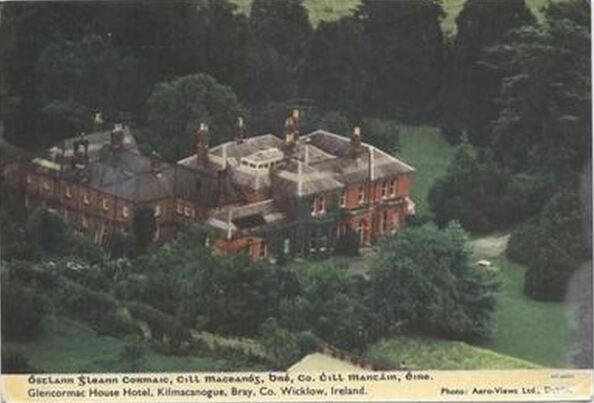 ​The Jameson family of Ardmore (UCD) and Glencormac

John Jameson was involved with Bow Street Distillery of Dublin, in the early 1800s.  He married Isabella
Stein, daughter of the original owner.  By 1825 he was the sole owner of the distillery.  John died on
13 Oct 1851 and was buried at Drumcondra.  Isabella died at Alloa, Scotland aged 78 and was buried
there.

2                  James Jameson born 30 Jan 1806, Dublin.  James of 55 Prussia Street and of Delvin Lodge
married Lucy Cairnes, third daughter of William Cairnes owner of the Drogheda Brewing
company on 17 Oct 1843 at Colpe Parish Church.  Lucy's mother was Mary Anne Woolsey
of the Castlebellingham brewing family.   James was a partner in the firm John Jameson &
son, Distillers and Jameson, Pim & Company, brewers.  James died 30 Jan 1889 at
Glencormac, Co Wicklow age 83 leaving an estate of nearly 490,000 pounds.  In his Will
dated 1884, he left the house in Glencormac together with furniture etc to his wife along
with 70,000 pounds.  His shares in the firms were left in equal sums to his sons with the
exception of his son John William Jameson, who received assets during his lifetime.
Instead he left John 22,000 pounds, John died in 1888 before the Will was executed.

6           George Lionel Jameson born 29 Dec 1880 at Lota, Cross Avenue.  He served in
the Royal Engineers during the Boer war attaining the rank of Captain.  He
married Anne Columbine Armstrong, youngest daughter of Captain J J Dunne
at London in December 1908.  They lived at Bettyglen House, Raheny, which he
commissioned in 1910.  In the 1919 honours list he was appointed OBE.  George
owned Raheny Park and Fox Hall close by which he leased to relatives.  George
was chairman and managing director of John Jameson & Son Ltd.  Anne died in
1949 and George in 1961, both are buried at St. Andrew's graveyard, Malahide.