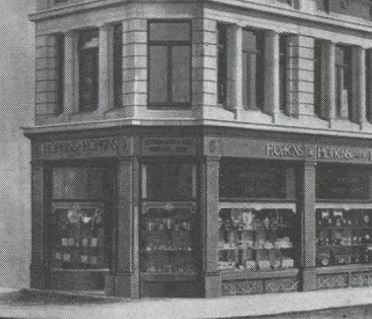 Hopkins and Hopkins came into being in 1868 when William and Richard Hopkins purchased the lease
of the premises and the stock in trade of Law and Co, whose proprietor F H Ellis was bankrupt.  They
advertised themselves as goldsmiths, jewellers and watchmakers, of 1 Lower Sackville Place, Dublin and
were the agents for Waltham watches in Ireland.  In 1879 Edmond Johnson, one of Dublin's foremost
goldsmiths, started restoration work on the Ardagh Chalice and was given permission to make copies
of it, and other objects.  In 1890 Hopkins purchased dies made by Johnson for the Ardagh Chalice, the
Tara Brooch and the Cross of Cong from the estate of William Cunningham Joyce.  They became
renowned for their Irish/Celtic art jewellery.

After the death of Miles Richard Hopkins, the executors eventually agreed to transfer the assets to a
limited company realising that a large proportion of the company was in the company name.
John Fisher became a shareholder as did Robert Somerville Foster Murphy, the manager who had held
the fort during the court battle.

The building suffered damage in April 1916 and the company put in a substantial claim for building
damage and loss by destruction or looting of workmen's tools.   The were also numerous claims for loss
of  items under repair at the premises. In 1922 their premises were held by troops who recognised the
Dáil when the Ballast office on the opposite corner was occupied by irregular troops.

Sam Maguire captained the Hibernians Gaelic football team, Chairman of the London County Board
and was a trustee of Croke Park.  He died in 1927 and after his death a group of friends raised money for a
cup in his memory.  Hopkins & Hopkins were commissioned to create the Sam Maguire silver trophy.  It is
possible that they outsourced the manufacturing of the cup to the silversmith Matthew J Staunton of
D'Olier Street but the only assay marks are those of Hopkins and Hopkins.  The cup costing 150 guineas
went on display at H & H before being formally handed over to the memorial committee.  It was
presented to the GAA and was first played for on ​30 Sep 1928 when it was won by ​Kildare.

They supplied the Presidential Insignia in 1956.  Robert S F Murphy died in 1959 and Edward Nixon took
over as manager.  They advertised they were Rolex agents in 1962.  No advertisements have been found
after 1970 when they were advertising wedding rings and it it thought that the company disappeared
around this time and the Irish Nationwide took over their building.

John Hopkins, a farmer of Tullow, Co Carlow married Mary Kepple in 1815.  John was later a merchant and
Linen draper.

1            Robert Alexander Hopkins baptised 15 Dec 1822 at Tullow married Elizabeth Beatty on 28 Nov 1865
at the Wesleyan Chapel at Clooneclare, Manorhamilton.  Robert was a draper of 171 Great
Brunswick Street and Elizabeth was the daughter of William Beatty, a farmer.  Robert died at 4 May 1873
at the  Hill of Howth and was buried at Mount Jerome.  He left 8K in personal estate and his brothers
William and Richard were his executors.  His widow was granted leave by the court to carry on the
business so that the trusts of his will could be executed.  Elizabeth died 4 Sep 1882 at Great
Brunswick Street and was buried at Mount Jerome.  Her executor was Richard Beatty of Innismore,
Co Fermanagh who was also the curator of John Beatty Hopkins, a minor.

3        John Edward Alment Fisher only son born 06.10.1868 at 46 Shelbourne Road living at
Dunville Avenue, Ranelagh married Letitia West daughter of Thomas West of 53 St
Lawrence Road, Clontarf on 24.10.1906 at the Parish Church, Clontarf.  John of 11
Tivoli Terrace east was a Freeman of the city of Dublin and a member of the Goldsmiths
Corporation.  He was a partner in the firm Hopkins and Hopkins from 1911 following the
death of his Uncle Miles.   He was a shareholder following its incorporation in 1915.  He
died 25 Nov 1935 at Portobello House, late of Tivoli Terrace, Kingstown.  He left 10K in
​                       person estate and is residuary legatee was a his nephew John S West.

1        John Kepple Hopkins eldest son married secondly Elizabeth Sproule daughter of the late
Christopher Lynch of Monkstown and widow of Dr Sproule of Somerset on 01.11.1899
at Christ Church, Bray.  John was a widower and journalist.  Elizabeth Sproule took
proceedings to have her marriage declared null in 1902.   John died 31.12.1925 at
Rathmines and was buried at Mount Jerome.

2        Sarah Marie Hopkins eldest daughter born circa 1863 was a shop assistant and died at the
Adelaide Hospital late of Great Brunswick Street on 14 Jul 1881.

7        Olive (Olivia) Prudentia Hopkins born circa 1877 lived with her uncle Miles both in Blackrock
and Monkstown and died 22.07.1941 at 74 Kenilworth Park.  Colliers of The Castle Works,
Bray made the funeral arrangements and she was buried at Mount Jerome with her brother
and sister.  Olivia left personal estate of 10K.

4              William Hopkins born circa 1830 in Tullow, Co Carlow was a Town Councillor and senior partner in
the firm of jewellers W & R Hopkins  (Hopkins & Hopkins ) of Sackville Street, a member of the
Dublin Corporation and the Paving and Lighting Committee.  He was a follower of John Redmond
and served as TC for the North Dock Ward.  A staunch supporter of Parnell and Home Rule, he was
a director of The Independent Printing and Publishing Company, a company formed to produce
newspapers (The Daily Independent and the Evening Herald) to advance the cause of home rule.  He
lived at Lakelands from 1890 until his death.  He died a bachelor on 03.09.1893 at Lakelands aged 63
years.

5              Miles Richard Hopkins born circa 1832 in Tullow, Co Carlow trained as a goldsmith and jeweller in
Dublin, London and Paris before retuning to Dublin in 1868 and setting up in partnership with his
brother.  Of 1 Brighton Terrace, Monkstown, he was a senior partner in Hopkins & Hopkins and a
member of the Irish National League.  On the death of his brother he became sole proprietor and
lived at Lakelands from 1890 to 1898.  He was returned unopposed to the North Dock ward on the
death of his brother.  Richard was living at Belgrave Square in 1901 and Brighton Terrace,
Monkstown in 1911.  He died a bachelor on 20.11.1911 and was buried at Deansgrange.  He left
personal estate of 28,500 just under 3 Million in today's money.  His niece Martha Hopkins and
nephew John Fisher were his executors.  He left a part of his library upon trust to Thomas Fitzpatrick,
editor and proprietor of the 'Leprechaun', and Arthur Griffith, proprietor of 'Sinn Fein', to be applied
to the 'Society of Irish Journalism and Reporters'.  No society had such a name but two had similar
names and they both laid claim.  The claim was settled by the courts.