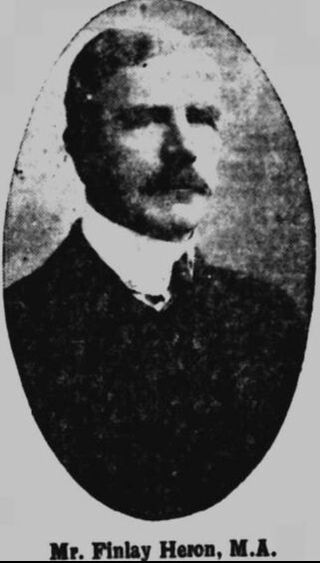 Robert Finlay Heron son of Robert Heron born circa 1821.  Robert was secretary to the Commercial
Buildings Company td and clerk to the Chamber of Commerce.  One of his tasks for the Chamber was
to keep a register of meteorological observations by day, week and year with readings taken at the
Commercial Buildings.   He married Martha Freeman at St Peter’s Church, Dublin on 5 Jan 1850.
Martha was the second daughter of John Freeman of Abbey View, Harold’s Cross.  Robert acted as
Hon Sec to a number of organisations including secretary to the Committee of the Great Exhibition in
1853 and later as Company Secretary to various Companies including the Dublin and Belfast Junction
Railway and the Mining Company of Ireland.  In 1856 his salary was increased from 300 pa to 500 pa
by the Irish Mining Company.   They moved to Dawson Court in 1884.  Robert died 30 Mar 1884 at
Dawson Court and Martha died 14 Aug 1898.  ​Both were buried at Deansgrange.

2             Robert Finlay (Finlay) Heron second son born circa 1852 in Co Dublin graduated Trinity MA.  He
was town clerk for Blackrock and secretary to the council.  He published The Law and Practice
of Municipal Elections in Ireland in 1891. He married Ethel Jane Austin in Belfast on 6 Oct 1908.
Ethel was the daughter of Rev F Austin, Rector of Castlecomber, Kilkenny and was 26 years his
junior.  He was presented with a silver tray a tea service by the members of the Urban Council
on the occasion of his marriage.  He was also executive sanitary officer for Blackrock and
accountant to the Drainage Board.  They were living at Belgrave Square in Blackrock in 1911
and he was presented to the King having organised the festivities for their arrival in to Blackrock
He announced his retirement from the council in 1912 and was a founder member and Hon
Sec of the Association of Municipal Authorities in Ireland (AMAI).  He was very successful in
obtaining government grants for roads, houses etc. During his tenure he oversaw the building
of 235 council houses, the clearing of slums, a playground erected as well as artisan houses.  His
planned departure did not go through and in 1912 he oversaw the purchase of land for building
houses for the working class in Booterstown.  He retired in August 1913 on a pension of £373,
having completed 26 years of service but this was not ratified until the 31st October when he
was presented with a silver cigar box, made by Messrs West and son of Grafton Street and an
Ormolu Clock made by Ernest Edwards of Blackrock.  Sir Charles Cameron made the
presentation and said he knew his father and knew Finlay as man and boy and that he had
been a very good school boy and had never ‘mitched’, that he was a skilled negotiator on behalf
of the township.  Finlay’s pension was greater than the combined salaries of town clerks in
Drogheda, Galway and Kilkenny and was testament to his success in office.  He continued
working with the AMAI and petitioned government to enact legislation to build houses for the
working class and to negotiate on behalf of local councils, offering advice on points of law and
procedure. He resigned in 1918 and went to live in the South of England.  He died whilst
swimming at Worthing, Sussex with his brother  in July 1923.

6             Sarah Anna (Annie) Heron second daughter born 2 Aug 1861 in County Dublin living at St James’
Place Booterstown in 1911.  She married John Everard Henry Colclough on 26 Jun 1912 at SS
Philip and James.  John was a widower from Bournemouth and the son of John Colclough.  Sarah
was a widow living with her sister Sophia in Bournemouth in 1939.