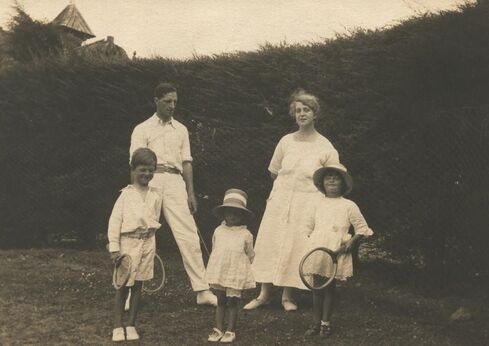 
Robert Gorman born circa 1850 in Sligo married Agnes Middleton Pollexfen on 21 Nov 1878.  They had
four children.  Agnes was the fourth daughter of William Pollexfen of Union Square and Merville
House, Sligo and Elizabeth Louisa Middleton.  Agnes’s sister Susan Pollexfen* was married to John Butler
Yeats, son of William Butler Yeats.  Another sister Elizabeth Anne was married to Rev Alexander
Barrington Orr of Brooklawn, Mount Merrion Avenue.  Her sister Isabella married the artist John Varley
the younger and was an artist in her own right.  Robert was an extensive farmer and chairman of the
Ballymote Agricultural Society.  He was chairman of the Sligo Gas Company and an elected member of
the Harbour Board.  He also carried out an extensive milling business at Ballymote.  He died 19 Oct 1915
and left over 40K in personal estate.  Agnes died 25 Oct 1926 at Wine Street and was buried with her
husband.
​
1            Geoffrey Pollexfen Gorman born 13 Aug 1884 at Wine Street.  In 1901 he was attending the Portora
Royal School, Enniskillen and was a flour clerk living with his parents in 1911.  He was Hon Sec of
the Sligo RFC in 1904.  He went to Texas to learn farming and cattle breeding but sold up on the
death of his father when he was left an estate and £1500.  He enlisted in the Artists Rifles in 1916
and married Eileen Anne Duffy on 3 Feb 1916 at St Anthony's Church, Forest Gate and was granted
a divorce later that year.  He was with the Sherwood Foresters (Nottinghamshire and Derbyshire
Regiment) when he married Nellie Corlin (Conlin) of Liverpool on 1 Nov 1919.  In 1926 he was living
at Peace River, Alberta, Canada with his  wife and son Robert.

2            Henry Wood Gorman, second son born Wine Street, Sligo 19 Nov 1885.  Henry married Eva
Elizabeth Stewart Corry at Christ Church, Leeson Park on 9 Apr 1913.  Elizabeth was the daughter
of George Frederick Stuart Corry and Lucy Henley Armstrong.  Henry sold Cloonshanballa in 1919.
He appeared in a charity performance at the Theatre Royal in 1920.  The family were living at
Lucerne, Stillorgan in 1921 and in a house called Lucerne in Glasgow by 1934.  They had four children.

4           Elizabeth Mary (Elma) Gorman born 14 Mar 1894 at Wine Street, Sligo.  In 1911 she was attending the
Victoria High School in Londonderry.  She married Edward Fawsett Browne 7 Mar 1916 at
Christchurch, Leeson Street.  Edward was a horse dealer and the son of Richard Brown, Secretary of
the Gas Light Company of Sligo.