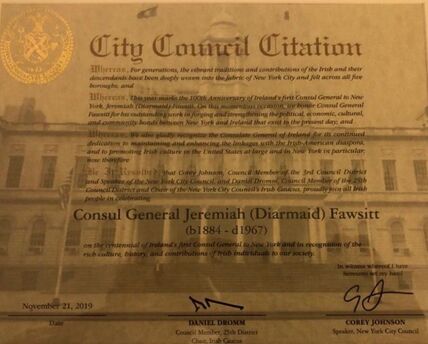 Diarmaid Fawsitt, republican, civil servant and judge was the son of Boyle Fawsitt, Merchant
and Hannah (Annie) Lucey.  He married Cathleen Mary Kenny daughter of William Kenny, Builder
in 1911 in Cork.  Diarmaid born Jeremiah was a founder member of the Cork Industrial
Development Association and key in bringing the Ford Motor Company to Cork.

He was appointed first Consul General of the Irish Republic to America in 1919 and worked
closely with Eamon De Valera.  He served with the Irish delegation that negotiated the Anglo–Irish
treaty of 1921 reporting back to Michael Collins.  He was Assistant Secretary of the Department of
Industry and Commerce but dismissed in 1923, he had never been happy to work under Gordon
Campbell.  Diarmaid Fawsitt then purchased a tobacconist shop on Dame Street and studied law.
He was called to the bar in 1928, took silk in 1938, appointed circuit court judge in June 1943 and
retired in 1956.

In November 2019 a Citation was given to the family by the City of New York, to commemorate the
opening of the first Consulate for the Irish Republic in the US in 1919.  The accompanying letter
signed by Andrew Cuomo, of the New York State recognises Diarmaid's contribution.