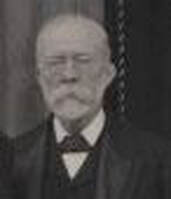 William Francis Cotton born circa 1822, eldest son of  John Cotton, Iron founder of Ringsend,
specialising in the manufacture and sale of gas burners to the gas companies.  William and
his two brothers became engineers.  His brother Thomas Joseph was superintendent of Gas
for Dublin Corporation and his younger brother was appointed by the Russian Government
- Engineer to the Imperial Gas works of Moscow.

William attended the Polytechnic Institute of Dublin (later known as the College of Science).
He married Teresa Long in January 1855 at Francis Street in the parish of St Nicholas
Without.  He was appointed Gas examiner of Dublin in 1861 resigning in 1873 to become
acting secretary to the Alliance Consumers Gas Company (a merger of Alliance Gas and
Consumers Gas and the forerunner of Dublin Gas), of which he became Secretary and
Manager by 1880.  While working for the Corporation he  was tasked with illuminating the
King's Room in the Mansion House.  Finding nothing suitable in Ireland or England he
designed a gas light 'a sunlight' twelve foot in diameter with 400 gas jets arranged in the
shape of a star, which he had manufactured by Messrs Gregg and sons in Brunswick Street.
As secretary of the Gas Alliance, he purchased their new head office at D'Olier in 1882 for 5K.

The Cottons were a very sociable family and held many parties at Hollywood House and on
board William's yacht the White Rose, a 50 ton yawl.  William was elected Alderman of Dublin
Corporation in 1899, High Sherriff in 1901, and MP for South Dublin in 1911.  He was a Director
of The Dublin United Tramways company, and the Hibernian Bank.  He was also one of the
founders of the Hibernian Insurance Company and governor of The Richmond Lunatic Asylum
as well as acting as chairman to Alex Findlater & Co and the Parnell Monument Committee.
He married again circa 1907 and left his property at Richmond  Avenue to his second wife.  His
funeral Mass in Dundrum was followed by burial at Glasnevin in the O'Connell circle.  He left
nearly 30k in personal estate.  He was survived by his sons William and Thomas and his
daughter Margaret.

​3           William Francis Cotton born 24.04.1857 educated at the University on Leeson Street and
the French College, Belgium and the College of Science in Dublin was a Civil engineer.  He
married Mary Connolly, daughter of William Connolly at St Mary's Haddington Road on
01.06.1895.  William lived on Sir John Rogerson's Quay but moved to 60 Gardiner Street
after his marriage.  He  took over as Chief Engineer of The Alliance Consumers Gas
Company in 1904, on the resignation of his father.  He resigned this role in 1917 and
moved to England.  He died 19 June 1923.

6            John Joseph Cotton, third son born 19.02.1863 at Portrane, Donabate.  A forward,
he played for Wanderers Rugby Club and was capped for Ireland on the 2 Mar 1889
in a test match again Wales, played at Swansea, in which he scored a try.  This cap
fetched £1500 when it was sold at auction in Chester in 2009.  He was an assistant
secretary of the Alliance Consumers Gas Company when he married Mary Josephine
Small, daughter of Henry Walt Small of Leven, Fifeshire on 18.09.1893 at Manchester.
John was a member of the Pembroke Rowing Club and the Dundrum Cricket Club.
He died at Rydel Mount, Milltown on 08.10.1896 aged 33 and was buried at
​              Glasnevin cemetery.