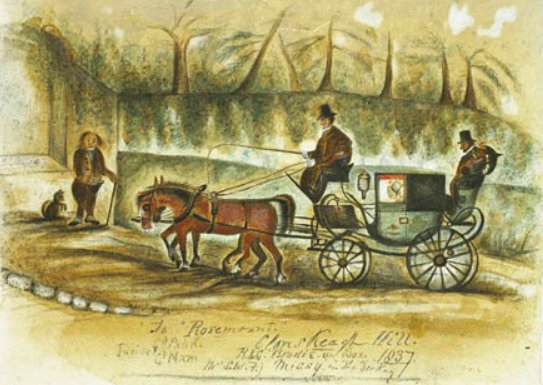 To Rosemount by Richard John Corballis.
Corballis of Rosemount

John Corballis born circa 1735 was a timber merchant and saw miller of New Street in Dublin City.  He
is thought to be the son of John Corballis and Jane McManus who were buried in Cruagh graveyard.
John junior married Margaret Mooney circa 1766 and signed the Catholic Qualification Rolls in 1778.

He held Corballis Row in Cabbage Garden lane which he leased out.  He purchased the house and
lands of Rosemount in Roebuck from Mr Williams in 1780.  He died in 1805 and left 30K in personal
estate which included numerous properties including land and houses at Harold’s Cross and Francis
Street. This wealth was shared equally between his two sons.

2               Richard Corballis baptised at St Nicholas on 27 Jan 1769 was a Timber merchant and worked
with his father before opening stores at City Quay and Sir John Rogerson's Quay.  He married
Deborah Taylor, daughter of Bartholomew Taylor of Nonsuch, Castlepollard on 1 Nov 1791.
They lived at Baggot Street before moving to Rosemount.  Deborah born circa 1767 died
30 May 1845 aged 82 and Richard died 25 Aug 1847 at Roebuck and left 90K in personal estate.
Both were interred in the vaults of the Pro Cathedral.

1         Maria Margaret Mary Corballis born circa 1792 lived at Rosemount for most of her life.
but moved to the cottage on the grounds when her father died.  She died at Rosemount
Cottage, Roebuck on 7 Aug 1877 and was buried in the family vault at the Pro Cathedral.
She left 2K in personal estate.

3          Bartholomew Corballis eldest son born 13 Apr 1794 baptised at Westland Row on
19 Apr 1794.  He attended Maynooth College and was living at Rosemount in 1827.
He was disinherited and moved to Edinburgh following an argument with his father.
Local hearsay was that he had fathered two illegitimate daughters and was on the point
of becoming a bankrupt.

4          John Richard Corballis born 27 Aug 1796 attended Maynooth College.  He graduated Trinity
and was called to the Irish bar in 1820.  He married Jane Eleanor Martyn, eldest daughter
of Edward Martyn of Tulira Castle, County Galway on 24 Sep 1828 and they lived at Mount
street and later Baggot Street.  He inherited Rosemount and 2,000 acres in County Meath in
1847.  He was a member of the RSAI of the RDS where he sat on the Philosophy committee.
He was a commissioner for National education for The Charitable Donations and Bequests
Society.  A devoted Catholic he was incensed when it was intimated that the Roman Catholic
bishops had voted to forbid parents from sending their children to Trinity without special
dispensation.  This ban came into effect in 1871 and was only lifted in 1970.  He was a
director of the Grand Canal Company of Ireland and a member of the Royal St George Yacht
Club.  John died 13 Feb 1879 at Roebuck and left 80K in personal estate.  Jane died
31 Mar 1883 at Rosemount age 84.

2        Richard John Corballis born 2 May 1831 at Mount Street lived at Rosemount for
most of his life.  He was rumoured to be a recluse but was a governor of the Jervis
Street hospital and a member of the RDS proposed by Sir William Betham.  He was a
Knight of the Catholic Order of the Golden Spur and an honorary secretary of the
Dublin Mansion House Relief Committee for Relief of Distress in Ireland.  An amateur
he died a bachelor on 23 Sep 1931 at Rosemount and left over 500K in personal estate
of which 50K was in the UK.  He left 20K to the Jesuits in Gardiner Street, his
Brazilian Cross was left to Miss Christina Chichester of Runnamoat, Rosemount
was left to the Woulfe Flanagan family and the residue was left to his nephew
James Cecil Corballis who would later reside at Rosanna in Ashford.

3         Elizabeth Margaret Corballis baptised St Andrews in 1834. She lived with her sister
Jane in Terenure but after Jane's death moved back to Rosemount to live with her
brother.