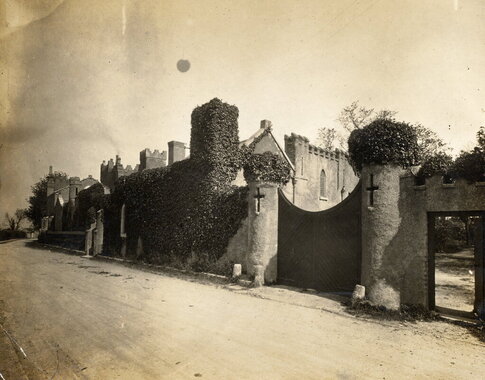 William Coates born 1833 and baptised 5 Jan 1833 at Rathdrum, Co Wicklow son of John Coates and Mary
​Cannon.  William, a builder married Ellen and lived at Annesley Cottage, North Strand from 1886.   William
had a horse, a yellow pony, a red setter dog called Bob and a tame fox which was led around on a chain.
Ellen died at Annesley Cottage on 31 Dec 1892.  She left £250 in personal estate to her husband and her son
Charles was her executor.  William was retired by 1901 and living at Astagob, Clonsilla.  He died at Grasmere
​Villas, Sutton on 5 Jan 1903 aged 63.  His son Isaac the informant.

4              Frances Coates born circa 1860 lived at 99 North Strand Road.  No 98 and 99 and the furniture was
hers on a deed of assignment from her father and she lived there with a sister and her brother
Isaac.  On 1 Oct 1898 she was detained at Richmond Lunatic asylum for six weeks under warrant
based on statements made by her sister and brother Isaac.  On her release and return to her
residence her furniture was missing and she took an action against her brothers James, Charles
and Isaac for the return of same.  Isaac admitted that he had removed the furniture at the behest
of his father who was living at Knockmacroon with another sister.  Frances won her action against
Isaac & James.  The recorder noted that she was not insane but perhaps 'flighty.... and eccentric'.
Frances, a spinster and dressmaker died at Jervis Street hospital late of 99 North Strand Road.  It
was reported that she lived alone by choice and and that a brother paid for her rent and taxes.  Her
home No’s 98/99 (a shop and Annesley Cottage) were put up for sale in November 1902.

6             Charles Coates born circa 1862 in the city of Dublin married Catherine Susan Daly of the City of Dublin
at Manchester October 1903.  Catherine was the daughter of James Daly, a Dublin Metropolitan Police
Officer and his wife Mary Behan of Belview Terrace, Clontarf.  Catherine was born at 6 Adelaide Road in
Kingstown on 19 Feb 1878, she was sister to Paddy Daly, leader of Michael Collins' Squad.  Charles was
a builder/carpenter operating from 72 Blessington Street from 1885 to 1898.  Charles became a
property developer and building contractor- flipping some properties and retaining others like those at
Merrion Street to rent out.  He built and sold 57 houses at Cabra Park, St Peter’s Road.  The family lived
at Grasmere Villas in Sutton before moving to Ardnadeen, Castle Avenue in Clontarf.  Charles was
retired by 1914 and was granted a patent on a mouth piece for use with cigars and pipes.  They moved
to Hollywood, Carrickmines where Charles rented out part of the grounds for camping.  By 1920 they
were living at Amana in Stillorgan.  In 1921 Charles purchased Prospect Hill in Carrickmines.*  Charles
died 27 Apr 1925 at Shanavaun, Carrickmines.  He died intestate and left 19K in personal estate.

Catherine stayed on at Shanavaun and it was from here that she secondly married John
McGovern, a wine merchant and son of Peter McGovern, a farmer at Foxrock RC Church on
​               14 Jun 1926.  By 1939 they were living at Kilbarrack Lodge, Sutton.

4             Lorna Louisa Daly Coates born 23 Feb 1920 at Coolgarriff.  She was living at Kilbarrick Lodge
when she married Patrick Noel Ryan at St Kevin’s Church on 19 Jul 1944.  Patrick was a
barrister living at the South Circular Road, son of Patrick Ryan, barrister.

* Prospect Hill was renamed Shanavaun by the Coates family and is now called Mountsandel, information
provided by Oran Ryan, a descendant.