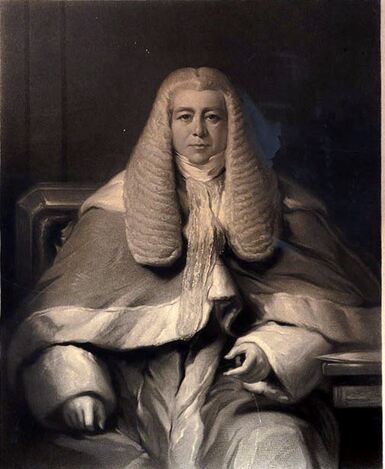 Francis Blackburne born 11 Sep 1782 at Great Footstown, Co Meath son of Richard Blackburne and
Elizabeth Hopkins at great Footstown, near Slane Vo Meath.  He was educated at the  Rev Hugh
​Nelson's school in Dunshaughlin and the Rev White’s school in Dublin.  He graduated Trinity in
1803 and was called to the Bar in 1805.  In September 1809 he married Jane Martley, daughter of
William Martley of Ballyfallen, Co Meath and his wife Elizabeth Rothwell.  He was an Irish judge and
eventually became Lord Chancellor of Ireland.  He prosecuted Daniel O'Connell and presided at the
trial of William Smith O'Brien.  They lived at Willow Mount, Mount Tallant Avenue in Rathfarnham which
was sold in 1825 and had a town house at Leinster Street before moving to Roebuck Hall and 34
Merrion Square.  He was appointed Attorney General in 1831 and Master of the Rolls and Records of
the Court Chancery in 1842 and Lord Chief Justice in 1846.  They lived at Roebuck from 1827 to 1851
before moving to Rathfarnham Castle in 1852.  He was on the Commission of the National Board of
Education but resigned in 1853 together with Archbishop Whately and Baron Green.  His sister
Elizabeth died at 24 Hatch Street on 30 Aug 1863.  He was a member of the RDS and a supporter of the
Antient Concert Rooms. He is remembered for his melodious voice and singing of Moore's melodies.
He died 17 Sep 1867 at Rathfarnham Castle and was buried at Mt Jerome.  He left 80K in personal
estate.  Jane died 27 Sep 1872 and was buried at Mount Jerome.  She left 8K in personal estate.

1          Francis Henry Blackburne Daniell born 19 Jan 1845 married Caroline Sophia Bence-Jones,
daughter of William Bence-Jones and Caroline Dickinson, on 16 Aug 1877 at Kilmalooda
Church, Cork.  Francis worked as an editor of the Historical Manuscripts Commission and
for the Calendar of State Papers.  He died in 1920.

3             William Martley Blackburne eldest son born circa 1821 lived at Tankardstown married Mary
Thorpe on 12 Jan 1847 at St Peter’s Church, Pimlico.  Mary was the fourth daughter of the Rev
William Thorp of Belgrave Street, London.  William died at Stephen’s Green South on 8 May 1868
and was buried at Mt Jerome.  He left 3K in personal estate.

5            Edward Blackburne third son born 13 Nov 1823 was a barrister.  He married Georgina Arabella
Graves at Monkstown Church on 25 Aug 1857. Georgina was the eldest daughter of Robert James
Graves of Cloghan Castle, Kings County and granddaughter of Rev Doctor Graves Dean of Ardagh.
Edward inherited Rathfarnham Castle and died there 7 Dec 1902 and was buried at Mount Jerome.
Georgina died 18 Jan 1911 at Rathfarnham Castle and was buried at Mt Jerome.  The pulpit erected
in Rathfarnham Church 1912 is dedicated to Edward’s memory.

12          Alfred Blackburne, youngest son born 22 Feb 1835 attended St Columba's College.  He died
12 Sep 1856 at Worthing in Sussex and was buried at Rathfarnham.  His remains were later
transferred to the family grave at Mount Jerome.