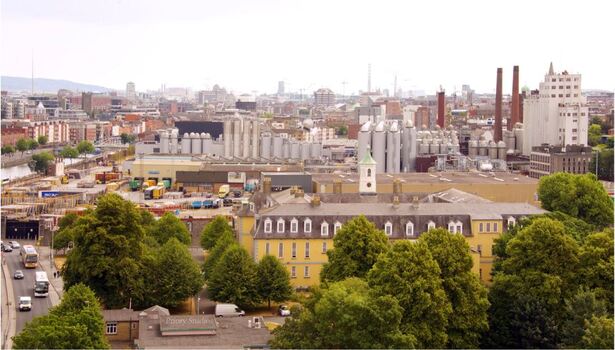 In the spring of 1839 the brewery hired an 18 year clerk, Dionysius Boursiquot, the son of a Anna Maria Darley, a Guinness relative-by marriage. Dionysius's father was thought to be the son of Trinity lecturer, Dionysius Lardner, and not the son of Anna Darley's husband, Samuel Boursiquot, a Dublin wine merchant.   Lardner was their lodger. Dionysius Boursiquot, who later changed his name to Dion Boucicault became a famous playwright and actor-manager.  He was described as “slim and lively, with the dark hair and blue eyes typical of a certain type of Irish native”.   Arthur Lee became smitten with him.

At age 42, Arthur Lee Guinness was living unmarried in an apartment at the St James's Gate brewery.  An American relative described his apartment in 1840 as "crowded with knick-knacks, statuary, paintings, stuffed birds etc. His drawing room is furnished in Chinese style and most richly. In the yard there are plenty of gods and goddesses etc.  There is a fountain which plays into a willow tree. It was hardly the conventional lifestyle of a middle-aged brewer."

He seems to have been a sensitive soul, writing poetry, collecting pictures and his personal seal was a young Greek god.

A surviving letter in the Guinness archives from June 1839 is the only clue.

My dear Father, I well know it is impossible to justify to you my conduct if you will forgive me it is much to ask, but I already feel you have & I will ever be sincerely grateful - I know not what I should say, but do my dear Father believe me I feel deeply - the extreme [sic] & undeserved kindness you have ever, and now, More than ever shown me.
Believe me above all that "for worlds" I would not hurt your mind, if I could avoid it, of all the living. Your feelings are most sacred to me, this situation, in which I have placed myself, has long caused me the acutest pain & your wishes on the subject must be religiously obeyed by me. I only implore you to allow me to hope and forbear a little longer, I feel it but just to do so.

Your dutiful, grateful but distressed son
A.L.G.
​
It is thought Boucicault was paid to leave the country, he turned up in London in May 1840 with sufficient money to buy a horse and entertain lavishly.

Arthur Lee left the brewery partnership, taking cash out of the business, £12,000, to buy his own home, Stillorgan Park.   A new partnership was formed without Arthur Lee, his father now as head in name only, his brother Benjamin along with John Purser, junior managing it, and the company was kept afloat.

Arthur did much to help those who served on his estate particularly during the famine period.   They later presented him with a small obelisk shaped block of Connemara marble engraved as follows:
1847
To Arthur Lee Guinness Esq
Stillorgan Park
To mark the veneration of his faithful labourers who in a period of dire distress were protected by his generous liberality from the prevailing destitution.
This humble testimonial is respectively dedicated consisting of home material. Its colour serves to remind that the memory of benefits will ever remain green in Irish hearts.